Top-spec Ford EcoSport Titanium S is well equipped, but is a little underwhelming behind the wheel 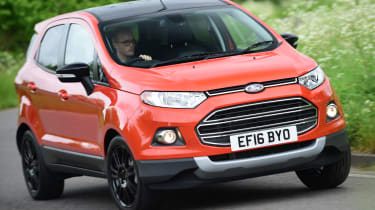 High price aside, the Titanium S is Ford’s best attempt yet at making an EcoSport that will really tempt buyers. It’s well equipped and reasonably practical, while the EcoBoost engine is an eager performer. But the black exterior trim can’t distract from its awkward looks, disappointing quality and underwhelming driving experience. A Citroen C4 Cactus is still a better-rounded package, while cars like the Mazda CX-3 justify their higher price tag with a much more rewarding drive.

Everyone wants a slice of the compact crossover market. It’s a sector that’s now inundated with great models to cater for buyers looking for stylish looks and a jacked-up driving position, but that’s small enough to make it easy to drive in town.

Despite having all the necessary credentials, the Ford EcoSport struggled to make much of an impact. Last year, however, Ford lopped off the rear-mounted spare wheel in an effort to improve practicality and boost its aesthetic appeal. And now it’s added a dose of performance by adding a new Titanium S trim and powerful three-cylinder engine to the range.

The engine is lifted from the Fiesta Red and Black Edition models. It’s got 138bhp and 180Nm of torque, so it feels pretty punchy and makes a characteristic three-cylinder thrum when you rev it. It doesn’t feel as lively as it does in the Fiesta (0-62mph takes 11.8 seconds) but it’s quick enough for most and encourages you to drive more enthusiastically than you might in other EcoSport variants.

The Titanium S has been treated to a 10mm lower ride height and tweaked sports suspension in a bid to improve the driving experience. The steering feels a bit more precise, but the ride is too firm and can feel quite unsettled at higher speeds and on bumpier roads. A Mazda CX-3 might be more expensive, but it's far more enjoyable and comfortable to drive. There’s a noticeable amount of wind noise around the door mirrors, and you do notice the EcoSport’s extra height in the corners. 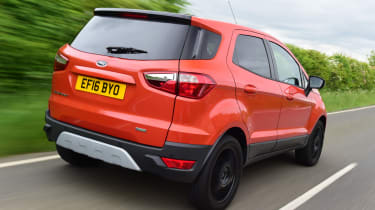 From the outside, the EcoSport still looks slightly awkward, but Ford has added some style with black wheels and a black roof. The interior is lifted pretty much unchanged from the Fiesta, though Titanium S cars have plenty of piano black trim on the centre console and door handles. Our car was fitted with Sony DAB radio and navigation, too, though it’s starting to show its age against more modern rivals like the Renault Captur.

Passenger space is pretty good, with enough room in the back for two tall passengers, while the boot is a decent 333 litres. While that’s not as good as a Peugeot 2008, it’s actually roomier than Ford’s apparently bigger Focus. It’s accessed by an awkward side-hinged tailgate, though, which is heavy to open and difficult to use in tight spaces. 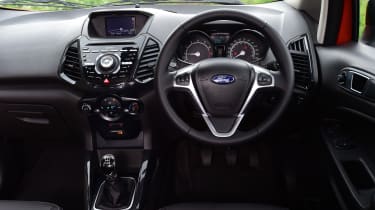