Ford has revised its EcoSport again. We see if sporty new trim can help small SUV fight the VW T-Roc and Mazda CX-3 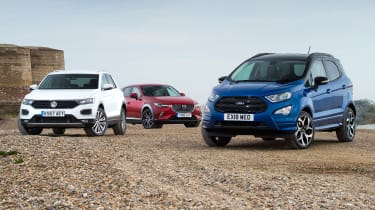 It’s fair to say that the Ford EcoSport hasn’t exactly been a sales success since it was launched in the UK in 2014. Two revisions later and Ford is trying to reinvent a model originally developed for emerging markets such as India, where it was initially built, into a sporty small SUV. That’s why this facelifted EcoSport heralds the arrival of an additional ST-Line trim level.

We’re testing it here with the brand’s punchier 138bhp 1.0-litre EcoBoost three-cylinder turbo petrol engine, and have lined up two small and sporty rivals to match Ford’s latest offering. First up is the Volkswagen T-Roc, featuring the German company’s 1.5-litre TSI Evo engine. It’s a little pricier outright, but also delivers a bit of extra power, although it’s targeting the same audience as the EcoSport.

• The fastest SUVs in the world

Also in this test is a small, sporty SUV that’s long set the benchmark for driver appeal in this class: the Mazda CX-3. It’s cars like this that the EcoSport has to beat if it wants to become a contender in a sector that’s already crowded but still growing.

So have the updates elevated the newcomer to the top of its class? 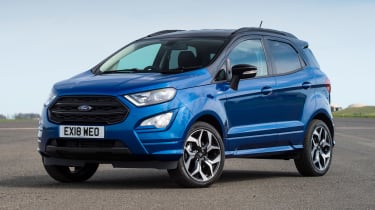 Ford is attempting to reinvent its EcoSport crossover yet again to keep pace with a rapidly growing group of rivals. This time it’s added a sporty flavour with the £21,145 ST-Line model we’re testing in conjunction with the 1.0 EcoBoost 140 engine.

The EcoSport’s engine is a known quantity, and linked to a six-speed manual transmission that drives the front wheels here, it’s as good as ever.

It pulls sweetly and strongly, given it has the least torque of the trio at 180Nm. And its sustained shove means the EcoSport returned a respectable 9.9-second time for the 0-60mph sprint. This was still the slowest here (trailing the Mazda by eight tenths and the VW by 1.3 seconds), but the effect of that turbo low down meant it beat the CX-3 over the majority of our in-gear runs. 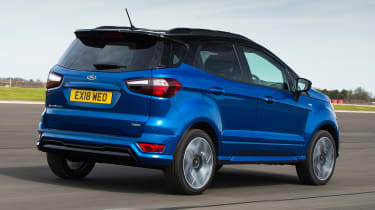 It still lagged behind the more potent T-Roc, although there’s adequate flexibility from the powertrain to ensure it’s not too taxing around town and on more open roads. It can’t match either rival for refinement, however, because wind noise from around the door seals and mirrors was noticeable and highlighted by the quiet motor.

At speed the EcoSport’s ride is inconsistent. It hops over bumps and the rear axle bobbles around on rougher roads, so it never feels that settled.

The steering is still sweet and you get a sense of the Fiesta bloodline here, but it’s only a gentle hint because in this jacked-up, higher-riding and heavier car, the dynamic prowess we know this platform possesses isn’t quite as obvious. 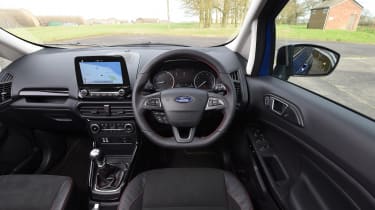 Testers’ notes: “The EcoSport’s firmer sports suspension helps with agility, but the ST-Line doesn’t tread the line between being genuinely enjoyable to drive (for a crossover) and comfortable to live with the rest of the time.” 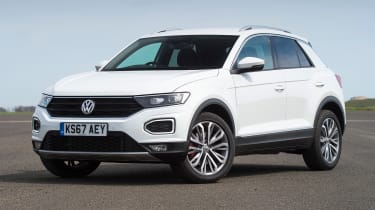 While the T-Roc usually competes against slightly larger and more premium rivals such as the Audi Q2 and MINI Countryman, the VW range overlaps with the EcoSport line-up. In £22,205 1.5 TSI Evo SE form (although our pictures show an SEL), the model offers an alternative to the Ford if you’re after a sporty but practical petrol compact SUV. The question is whether it’s worth the extra expense.

There’s not as much feel or the same sense of communication with the car through the T-Roc’s steering as with the Ford. However, buyers in this class will probably value easy and accurate driving dynamics over ultimate feedback, which you’re never going to get with a crossover. 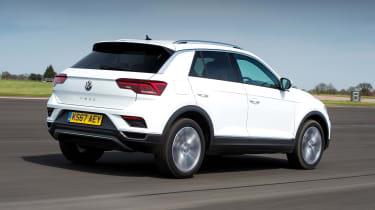 There’s also more grip and, importantly, more composure than in the EcoSport. The ride isn’t perfect, and while you will feel sharp intrusions from the road in the form of a noticeable reaction from the axles – particularly the rear, which jumps quickly but also settles well – over most surfaces the advantage of the T-Roc’s more sophisticated multi-link rear suspension is obvious. It’s nicely compliant and relatively well controlled, offering a good balance of ride comfort and handling agility.

The engine, too, is more capable than the Ford’s. It doesn’t feel as gutsy lower down in the rev range as its power delivery is smooth and refined, but with 148bhp and the highest torque output here at 250Nm, it proved its performance advantage against the stopwatch. The T-Roc completed the 0-60mph sprint in 8.6 seconds, while its slicker, snickier gearshift also meant it was 1.3 seconds faster from 30 to 70mph through the ratios, taking 8.2 seconds. 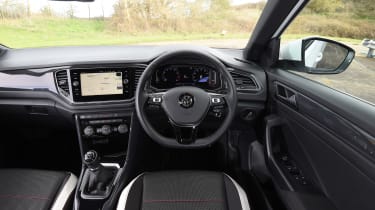 It was fastest in every gear, too, but the engine is by no means raucous. Instead, it’s quiet even when you rev it hard, but there’s no need to thanks to the motor’s flexibility. You also don’t notice the cylinder deactivation on the move because the process happens so quickly and smoothly.

Testers’ notes: “Adaptive dampers are available for £1,025 on this SE model, but while they improve comfort, they’re quite an expensive option that you can probably do without, because the T-Roc rides acceptably anyway.” 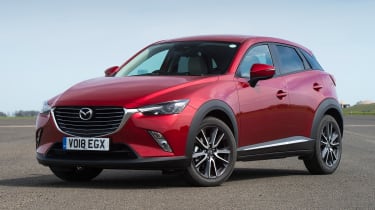 The Mazda CX-3 was facelifted last year, and although the changes were minimal, they didn’t alter the model’s stature as one of the best sporty small cars on sale. At £21,095, this Sport Nav just undercuts the EcoSport’s price. Here we test the 118bhp 2.0-litre version with a six-speed manual.

The stopwatch doesn’t lie and on test the CX-3’s relative lack of torque proved it’s not as flexible as its rivals. The 2.0-litre four-cylinder engine does without a turbo, and with just 204Nm it’s 24Nm up on the EcoSport, but 46Nm down on the T-Roc. 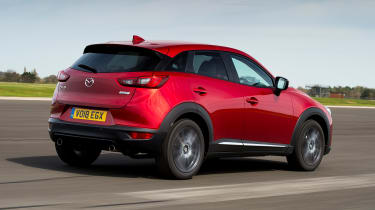 That torque is made higher up the rev range than its rivals, at 2,800rpm, which explains why the Mazda was the slowest car between 30 and 50mph, as well as 50 and 70mph in sixth, where it took 16.8 seconds.

However, as long as you can rev the engine out there’s a good degree of acceleration on offer. The CX-3 sprinted from 0-60mph in 9.1 seconds, helped by its slick gearchange; this makes working the box to keep the engine in its sweet spot less of a hardship. It’s the best shift action here.

The free-spinning unit encourages you to rev it and doing so is fun because it responds sweetly. It’s a little noisy, but the new engine mounts mean it’s marginally more refined than before, even if the motor isn’t as quiet as the T-Roc’s powerplant.

The steering offers a nice balance of weight and communication, giving a sense of the grip on offer, which is surprisingly abundant for a small SUV. You can turn the Mazda in at speed thanks to its decent body control, the G-Vectoring helping subtly to deliver a nicely agile package. 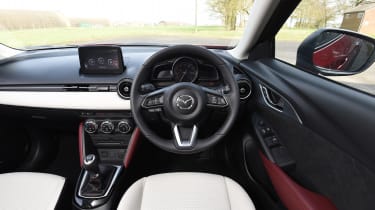 Despite this relatively rewarding dynamic edge for a small SUV, the damping is still plush and well controlled, tying the body down nicely but offering just enough absorption to soak up bumps and keep things composed. There’s a slight harshness to the way the CX-3 rides heftier bumps, but it’s certainly no worse than the EcoSport or T-Roc. Overall, it’s the sportiest, most direct-feeling car of the three.

Testers’ notes: “If you want the Mazda’s smart safety kit you’ll have to go for at least SE-L Nav trim or higher, because it’s not available on the entry-level model. This isn’t too much of a problem as it’s our pick of the line-up.” 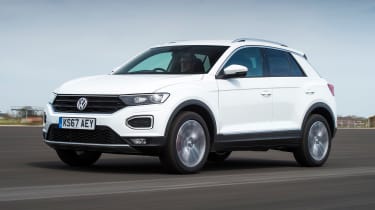 The T-Roc is the classiest car here and combines this with the most practicality, the best infotainment and the strongest, most refined engine. A comfortable set-up doesn’t come at the expensive of dynamic ability, because even though the SE model lacks sat-nav and costs more on PCP, the extra space, sporty feel and low running costs are worth the extra and put it top here. 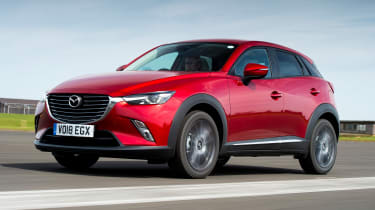 In places the CX-3 is flawed, but as a small and sporty SUV it rides and handles with a deft balance, marrying comfort with agility and engagement for a car of this type. It’s also economical and quick enough; it just lacks a little practicality. However, strong levels of safety kit and good equipment mean it’s still a worthy small SUV – especially if you’re a keener driver.

Styling updates, a perky engine and a new cabin have helped to improve the EcoSport, but the competition in this class is tough, and it’s still too far off the pace. This ST-Line isn’t as sporty as you might think, plus it trails its rivals for quality. Adequate performance and economy aren’t enough here, while poorer residuals don’t help its case, even if it is reasonably practical. 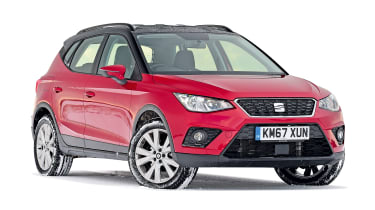 Based on similar underpinnings to the T-Roc, the Arona is a sharply styled small SUV that’s also great to drive. It offers plenty of usability and engagement, as well as lots of kit in sporty FR spec. It’s cheaper, too. 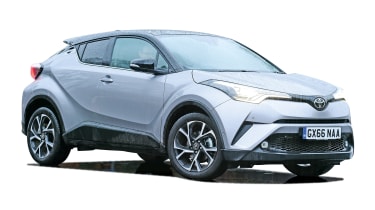 For this budget you could afford a well-specced Excel version of the Toyota C-HR from the class above. The 377-litre boot doesn’t look so small here, and the 1.2-litre model drives nicely, with a good level of precision for an SUV.