A facelift makes the Ford EcoSport a more competitive compact crossover, but is it enough to take on the best in class?

No doubt about it, this facelifted EcoSport is more of a threat to rival compact crossovers than before. However, the 99bhp diesel engine is simply too sluggish to recommend. Our advice would be to wait until the all-new EcoBlue diesel arrives in the summer, or better still to follow the herd and opt for the excellent 1.0-litre EcoBoost petrol engine instead.

Launched in 2014, Ford’s EcoSport has struggled to gain anything like the kind of popularity in the UK that the Fiesta and Focus enjoy, which is why the latest midlife facelift is of the more extensive variety. In total Ford says 2300 new parts have been fitted, among which is a much wider, more aggressive grille to bring it into line with the company’s other SUVs, the Kuga and Edge, and an interior that borrows technology from the latest Fiesta.

The company predicts that the vast majority of EcoSport buyers will opt for its highly acclaimed 1.0-litre EcoBoost turbo three-cylinder petrol engine, but that is not to say diesel is off the menu. Come the summer you’ll be able to buy an EcoSport with Ford’s new 1.5-litre EcoBlue four-cylinder diesel, pushing out 123bhp and 300Nm of torque through a new four-wheel-drive system – another first for Ford’s previously front-wheel-drive-only baby SUV. Until that point, those after a diesel EcoSport must choose an older engine of the same displacement and cylinder count but with less power and torque.

In fact, with 99bhp and 215Nm of pulling power this 1.5-litre Duratorq unit never manages anything other than leisurely performance, as indicated by a 0-62mph time of 14 seconds. That makes it a full three seconds slower than the EcoBlue engine, not to mention more than a second behind the almost £1,000 cheaper entry-level 1.0-litre petrol. 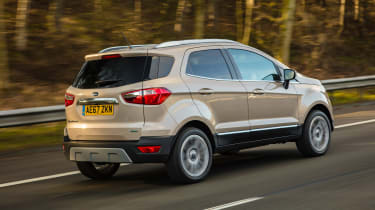 An official fuel economy figure of 68.8mpg should in theory mean the Duratorq engine is at least cheap to run, but in reality we managed no more than 50mpg on account of having to push it fairly hard to maintain decent progress. As an example of this, on the motorway (where diesels should excel thanks to their mid-range torque) you’ll often find yourself needing to drop from sixth gear to fifth just to keep up with the flow of traffic.

To make matters worse there’s also a lot of wind noise above 60mph, the ride on 17-inch wheels is fussy and there’s a fair amount of body lean when you corner quickly.

On the plus side the EcoSport’s steering is both well weighted and pleasingly direct, and the upgraded interior is a huge improvement on what went before. There are more soft-touch materials, a neat TFT display for the trip computer sits between the dials, and in the centre of the dash is Ford’s new SYNC 3 touchscreen with its crisp graphics and slick interface.

What hasn’t changed compared with the previous EcoSport is the slightly cramped rear accommodation that’ll have anybody close to six-foot tall with his or her knees pressed into the seat in front. What’s more, the 334-litre boot is not only on the small side for the class but retains its awkward side-hinged opening and a parcel shelf that you have to lift and drop manually. It’s small details such as these that leave the EcoSport lagging established compact crossovers such as the Renault Captur, not to mention impressive new contenders from the likes of SEAT with the Arona, Hyundai with the Kona and Citroen’s new C3 Aircross.