Does the addition of ST-Line trim and a more powerful EcoBoost engine turn the Ford EcoSport into a dynamic crossover? We find out... 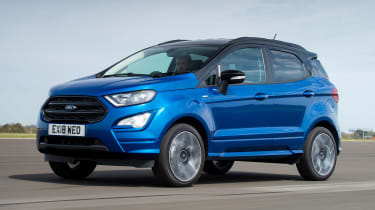 A much improved interior, acceptable performance from Ford’s strong EcoBoost engine and tweaked styling are all welcome attributes and improve the package, but it still feels like Ford is playing catch-up to the rest of the compact crossover pack with the EcoSport. An unsettled ride and so-so driving dynamics hamper it, along with some packaging flaws and unusual quirks. At least this new ST-Line trim gets a good level of kit, but it’s not the sporty small SUV you might think.

Where Ford’s rivals have triumphed with their compact crossovers, the Blue Oval’s offering – the EcoSport – hasn’t exactly been a success. This is the second facelift since it was launched in the UK in 2014 and it’s a more comprehensive round of updates as we’ve already seen from the 1.5 TDCi EcoSport.

However, that car didn’t fare much better than its predecessors, so now we’re turning our attention to this new ST-Line trim – a first for the EcoSport – which is powered here by a 138bhp version of Ford’s 1.0-litre three-cylinder turbocharged EcoBoost engine.

Confusing nomenclature aside (it’s ‘echo sport’ and ‘ee-co boost’) Ford is trying to reinvent the car once more, so does it cut it as a sporty compact crossover? 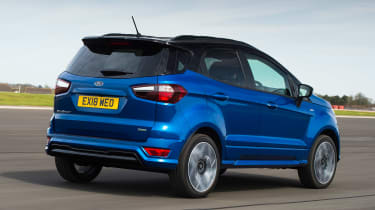 Not quite. The styling revisions give it more appeal, especially in sporty ST-Line spec, but the car doesn’t drive with the sharpness or willingness you might expect. A Mazda CX-3 feels tauter and more responsive, yet it doesn’t sacrifice comfort or ride quality either.

At least you get plenty of kit on this £21,145 1.0 EcoBoost 140 ST-Line model, with parking sensors, a reversing camera, climate and cruise control, sat-nav, Apple CarPlay and Android Auto and the option to add extra safety kit such as blindspot assist. However, a lack of AEB, even as an option, won’t help it compete against rival compact crossovers. Neither will the harsh plastics throughout the cabin, even if the new dash layout is much improved.

The EcoSport is based on Ford’s global B-car small platform, the same architecture that underpins the fantastic-to-drive Fiesta. You get hints of this bloodline, but they’re very mild and, combined with its heavier body, the EcoSport’s origin as a vehicle for emerging markets is still apparent.

The steering is sweet enough and with 180Nm of torque produced relatively low down from just 1,500rpm, it pulls acceptably, but it never feels quite as potent as the power output suggests. The 0-62mph sprint takes 11.8 seconds.

We know how refined the EcoBoost triple is, and even stretching it in more powerful form tested here hasn’t corrupted its composed performance. However, the quiet powertrain only highlights the lack of refinement in other areas.

There’s an audible whoosh from around the door mirrors and seals, while the ride is on the choppy side. At motorway speeds the EcoSport hops and bobbles around inconsistently, which means it’s not the most relaxing car for cruising. 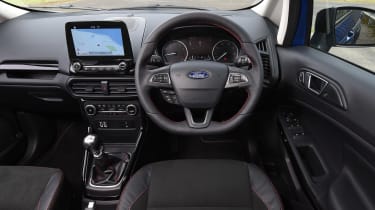 At least the driving position seats you high up for a good view out, while there’s more room in the rear than, say, that Mazda CX-3 or a Nissan Juke. It’s helped by the high, upright seats, which allow passengers to tuck their feet underneath the chair in front. It’s still not as roomy as the best in the class though.

The 356-litre boot is decent enough and gives a good degree of flexibility thanks to the boxy rear bodywork and uniform shape, but the EcoSport still features the flawed side-hinged tailgate, which doesn’t open on the correct kerb side for UK buyers.

With claimed efficiency of 54.3mpg and 119g/km CO2 it should be relatively cost effective to run even this most potent turbo petrol model, but this isn’t reason enough to buy one in a crowded class of more talented rivals.