A facelift isn't quite enough to fire the Ford EcoSport into contention with the compact crossover top dogs... 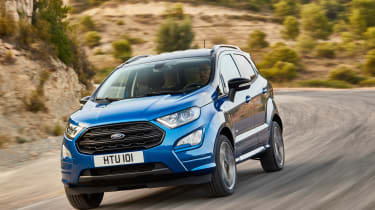 Mechanically and in terms of practicality, the EcoSport is still flawed. Clumsy driving characteristics, poor interior space and the odd unhelpful quirk all blot its copybook. Credit where it’s due though, the latest EcoSport is a better package than before thanks to big aesthetic improvements in the cabin with a smart new Fiesta-inspired dashboard. New tech also helps ensure Ford's crossover no longer feels quite so out-dated alongside newer rivals.

Despite Ford regularly occupying the top two spots on the UK’s top selling cars chart with the Fiesta and Focus, the firm hasn’t quite fulfilled its potential in the ultra competitive compact SUV sector over recent times.

Ford’s smallest SUV offering – the EcoSport – has struggled to impress since launch in 2013. It’s been outclassed by long running rivals like the Nissan Juke and Renault Captur, and made to look dated by more recent arrivals like the SEAT Arona and Citroen C3 Aircross.

However, Ford is determined to prove that there’s life in the EcoSport yet. To that end, a heavily updated version has arrived with first deliveries pencilled in on the calendar for January 2018.

The list of Ford EcoSport updates is lengthy for what is essentially a facelifted model. Alongside the sharper, sportier looks that are more in tune with the rest of the firm’s line-up, Ford has furnished the EcoSport with a brand new interior inspired by the one found in the new Fiesta. In addition there’s plenty of new tech, new customisation options, and a couple of new derivatives. 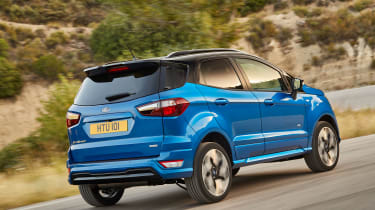 Though styling is a subjective matter, the old EcoSport often came in for criticism over the way it looked – important in what is such a style-driven sector. In our mind, the new car is much cleaner looking, and the ST-Line model even injects a little sportiness and desirability into the EcoSport’s design with a bodykit, 17-inch alloy wheels as standard, a painted contrast roof and plenty of ST inspired trappings in the cabin - including a leather trimmed steering wheel. Unsurprisingly for what is the range-topping model, the level of standard equipment on show is good, though much of it is lifted from the slightly cheaper Titanium model.

Cruise control, automatic headlights and windscreen wipers are in. Ford’s latest SYNC 3 eight-inch touchscreen infotainment system is fitted at the centre of the dash, complete with sat nav, Apple CarPlay, Android Auto and a rear view-parking camera. Lower down the range, basic Zetec models get a slightly smaller 6.5 display but it lacks navigation functionality.

Overall, the extensively redesigned interior is the most impressive aspect of the new EcoSport. Most of the switchgear on show is plucked straight from the new Fiesta, with a similar tablet-style infotainment screen perched atop the centre console. Just like in the firm’s big selling supermini, it’s extremely slick to use, while the screen resolution is bright and sharp. Alongside a new, clearer instrument panel and some decent interior plastics, it makes the EcoSport cabin a much nicer place to sit than before.

It is a bit cosy though. A facelift can’t work miracles and the same space and practicality gripes that tripped-up the old EcoSport remain. Space up front is par for the course, but rear legroom is particularly tight. The 355-litre boot doesn’t place the EcoSport near the front of the pack on practicality either, beaten by the 400-litre capacity of the SEAT Arona – itself not the most cavernous in class. Despite the sweeping changes, the boot is still a side-opening affair rather than a hatch and this can prove awkward at times. 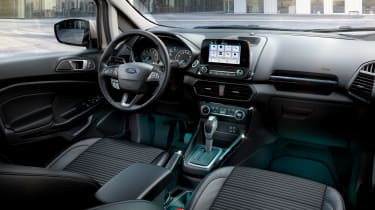 To drive it’s largely ‘as you were’. For most crossover buyers, driving characteristics aren’t a deal-breaker, but the EcoSport’s faults on the road are easily identifiable alongside sharper or more comfortable rivals. ST-Line models come equipped with specially tweaked sports suspension, but there’s still plenty of body roll and the ride remains busy, softly wallowing around even on roads that aren’t all that bumpy or undulating. The sharp, light steering and well-weighted gearbox help the car save face a little.

Ford’s 1.0-litre EcoBoost engine is a cracker in the Fiesta regardless of power output. Here, it’s decently refined and economical but it’s a shame that the 138bhp version can’t quite coax a decent turn of pace out of the EcoSport. Even on paper, the 11.8-second 0-62mph ‘dash’ is slower than that of a Citroen C3 Aircross equipped with a less powerful 108bhp three-cylinder petrol.

Ford’s effort doesn’t offer quite the same value as the Citroen either. Though the EcoSport is loaded with tech, it’s clearly more expensive than a range-topping C3 Aircross Flair both on list price and on a monthly PCP deal. Ford’s APR rates are low, but the lack of a dealer deposit contribution means that the new EcoSport is by no means a steal.