Can new Ford EcoSport get the better of the Renault Captur in this crossover power struggle? 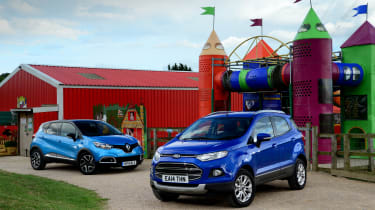 The supermini-SUV sector is thriving, and the Ford EcoSport is the latest model to join the party. It’s a product of the ‘One Ford’ strategy, where cars are sold globally to help reduce costs. The EcoSport was designed and engineered by Ford of Brazil, although the

cars coming to the UK are built in India. However, the EcoSport will need to be at the top of its game if it’s going to make an impact in the small SUV sector. And to see how it measures up in its first test, we’ve pitched it against the Renault Captur. The French SUV has some funky design touches, plus an efficient TCe petrol engine, so it will be a tough challenge for our EcoSport EcoBoost Titanium. The Dynamique MediaNav-spec Captur is £800 cheaper, too. Can the Ford overcome this and scale new class heights?

Click on the links above to read each in-depth review, then read on for the overall verdict.

Both cars use hard plastics and cost-cutting measures in places, but the Renault turns them into an advantage. The zip-off seat covers are an easy way to change the colour of the trim, while the elastic straps on the seatbacks are a neat alternative to pockets. The EcoSport does without Ford’s Easy Fuel misfuelling prevention device, while some of the rubber trim is poor, and the boot isn’t as well finished as the Renault’s. 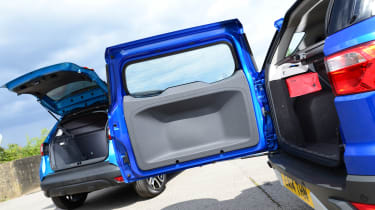 The 333-litre boot in the Ford is 122 litres down on the Renault’s maximum seats up capacity. But the most frustrating thing about the new car is its side-hinged rear door – to get full access in a multi-storey car park, you’ll need to make sure you’re nose-first into a bay.

The EcoSport’s spare on the back door seems old hat, but there are plenty of other cars sold in South America that are the same. Rough roads mean punctures are common in the region, so drivers need easy access to the wheel. At least the EcoSport has a spare – you make do with a repair kit in the Renault. 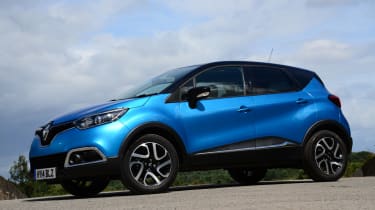 A combination of decent passenger space, a big boot, class-leading running costs and comfortable cruising ability means the Renault Captur takes an easy victory here. It comes up a bit short for performance, but if you take it easy, then the Captur will keep you entertained thanks to its decent in-car tech and stylish interior design. Add in a lower list price, and the Renault is a convincing winner of this test. 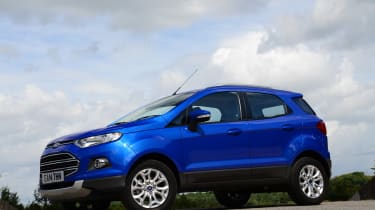 There's no avoiding the fact the Ford EcoSport is a disappointment. The EcoBoost engine delivers good pace, but it’s not that economical, while the car’s poor packaging and low-quality interior are a letdown. What’s worse, it doesn’t have the driving sparkle that makes the Ford range so appealing. It feels like the brand has rushed the EcoSport to market to get a slice of sales, but it delivers too little, too late.