We drive the revised EcoSport compact SUV - but can it improve on last year's disappointing model? 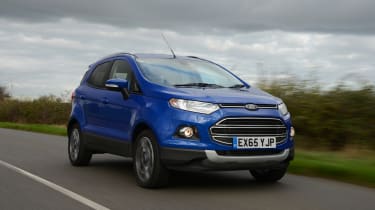 Ford’s changes to the previously sub-standard EcoSport couldn’t have come soon enough. It’s more stylish, more comfortable and better to drive, but ultimately still falls short of contemporary rivals like the Mazda CX-3 and Renault Captur. It lacks the character of its Fiesta sibling and misses out on the interior updates benefitted by the new Mondeo. Better? Yes. Best? Not quite.

To say the Ford EcoSport took a bit of a hammering from the motoring press when it launched last year would be an understatement. It was poorly built, awkwardly designed, and not much fun to drive. It suffered from a lacklustre engine range and below-par running costs, too. Ford’s dreams of taking on the Nissan Juke had fallen at the first hurdle.

But credit where credit’s due, Ford quickly realised its mistakes and set to work on a revised model. We drove the new car on UK roads for the first time this week to see whether upgraded springs, dampers and steering, as well as stiffer anti-roll bars, lower suspension and improved sound deadening could right the old car’s wrongs. 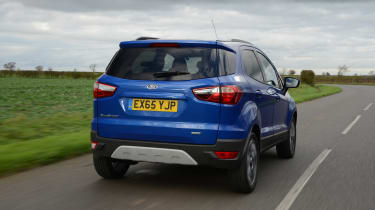 Gone is the awkward boot-mounted spare wheel – in its place is a more conventional rear end with the number plate moved up from the bumper to the boot. It gets the same Fiesta-esque front end and angular headlamps, but more has been done inside to spruce up the interior.

Our top-spec Titanium model now gets half-leather seats, while all cars now come with soft-touch headlining, additional chrome trim and some glossy accents on the dash. Unfortunately, Ford has made no attempt to rectify the EcoSport’s dated 90s mobile phone-inspired infotainment system. The introduction of the flagship Titanium S trim next summer will bring the Sony DAB radio from the Fiesta, but even that setup feels dated alongside contemporary rivals like the Peugeot 2008.

That said, you can spec your EcoSport with a couple of new options. The tinted glass (£200) seems quite trivial, but adding the Winter Pack – especially at this time of year – is a smart move from Ford. For just £230, the latter is a no-brainer, adding two-stage heated seats, heated door mirrors and the brand’s pioneering Quickclear windscreen. 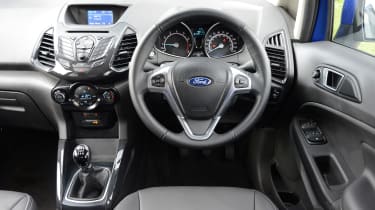 It’s on the road, though, where Ford needed to make the most extensive changes, and on paper it appears to have ticked a lot of boxes. The new springs and dampers give a more composed ride, but it still jitters over broken roads. It’s harder to see any improvement in the steering, but the lower suspension does make it marginally sharper on turn in.

But this isn’t a car designed for the racetrack. As a supermini-SUV it needs to be easy to manoeuvre around town and comfortable on the occasional longer journey. The removal of the spare wheel simplifies parking, but the boot is still side-hinged and as is still frustratingly tricky to operate in tight car parks. 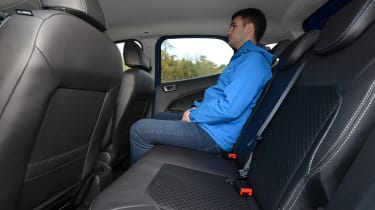 Space in the back is unchanged, with enough headroom for taller adults. Kneeroom is a little tight, and you’ll struggle to get three across the back on a regular basis. The Renault Captur is more accommodating, but you can recline the Ford’s seat backs slightly for increased comfort.

It’s quieter, too. There’s still no sixth gear, which could grate on lengthy motorway trips, but Ford has put a load more insulation into the dash, doors, headlining, and under the floor to ensure the updated car is more hushed. It doesn’t feel as grown up as a Mazda CX-3, but providing you spec the EcoBoost petrol instead of the underpowered diesel, you’ll avoid all but the worst engine and road noise.