The EcoSport was the first global Ford model to be developed in South America, although all examples of the car sold in the UK were actually made in Europe. Perhaps it’s for this reason that after the dynamic brilliance of other Fords, the EcoSport felt underwhelming to drive. It’s not just the experience behind the wheel that’s disappointing; low-rent cabin materials and a small boot gave competitors a useful advantage, and the Ford wasn’t priced keenly to compensate for these shortcomings. Updates have improved things to a point, and while the EcoSport has never been a truly bad car, it’s one that’s always been outclassed by its rivals. That’s why we’d suggest that you try out the alternatives.

It was inevitable that the B-segment SUV would become a thing. With buyers moving towards smaller cars, but SUVs proving more popular than ever, the supermini-sized crossover was launched by Nissan in the shape of the Juke in 2010.

It took a while for rivals to emerge, but within five years these smallest of SUVs were a common sight on European roads. The Ford EcoSport was among the first batch of models to be seen. It was introduced at the Paris Motor Show in 2012, although it didn’t hit UK dealerships until spring 2014.

Unlike the Fiesta on which it’s based, the EcoSport is no class leader, but that doesn’t necessarily mean that you shouldn’t consider buying one, especially if you find a particularly good deal on an example that has been well looked after. 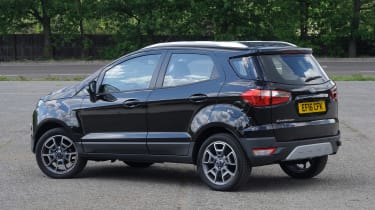 It’s now more than four years since the first examples of the EcoSport landed in British showrooms. Buyers could pick between turbo 1.0-litre (EcoBoost) or naturally aspirated 1.5-litre petrol engines, or a 1.5-litre diesel.

All EcoSports originally had a manual gearbox, but from summer 2015 the 1.5 petrol model could be specified with an automatic transmission called PowerShift.

The 1.5 TDCi offers the best blend of running costs and performance, while the 1.0 EcoBoost is the strongest petrol engine.

For an extra £2,200 Titanium spec added 17-inch alloys, part-leather trim, a starter button, climate and cruise control plus automatic lights and wipers; rear parking sensors were a £210 extra. The Winter Pack brings a heated windscreen, front seats and door mirrors (as well as climate control on the Zetec). ST-Line models add some sportier styling into the mix, too.

Alternatives to the Ford EcoSport Mk2

The Juke, by contrast, still looks distinctive, even if it’s beginning to show its age and has a cheap-feeling interior. Tougher adversaries include the Peugeot 2008 and Renault Captur, which are raised-up versions of the 208 and Clio; we’d say the Peugeot is the pick of the French duo.

But it’s the newer wave of entrants in the class that are the most impressive: the SEAT Arona and the Citroen C3 Aircross.

Until October 2015 a tailgate-mounted full-size spare wheel was a standard feature, but then it became a £100 option.

If there’s no spare wheel on the tailgate, a reversing camera can be fitted; such examples come with a tyre-mobility kit instead.

A five-speed manual box featured up until December 2017, when Ford decided to add an extra gear to the transmission.

The PowerShift auto transmission can sometimes suffer from clutch wear; the auto fitted to EcoBoost-engined variants is a lot more durable.

The quality of materials used in early EcoSports was poor, although things have improved as time has gone on. All models have a dash that’s easy to use, however, and cabin space is good for four people – or five if they’re not too big. Rake-adjustable seatbacks in the rear improve comfort but boot space is limited, at 335 litres with the bench up and 1,240 litres when it’s down.

EcoSports need maintenance every 12 months or after 12,500 miles. Minor, intermediate and major services cost £196, £240 and £297. Once an EcoSport is three years old it’s eligible for a Motorcraft check, at £149, including an oil and filter change plus a new air or pollen filter.

Ford has recalled the EcoSport three times so far. The first came in April 2015 because of possible fuel leaks due to corrosion of the fuel lines. Another recall followed five months later; rear suspension bolts could work loose or fail on cars made from November 2013 to February 2015. The most recent campaign came in May 2016, again due to potential fuel leaks.

The EcoSport has never appeared in any of Auto Express’s new or used Driver Power satisfaction surveys, but Ford tends to receive mid-range rankings with its biggest-selling models. While our sister title Carbuyer awards the EcoSport just three stars out of five, readers give it a more favourable 4.2 on average. They love its value, practicality and – in most cases – reliability.