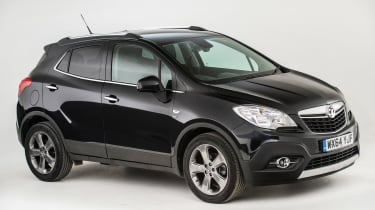 With thousands of Mokkas and Mokka Xs for sale, you’re not going to struggle to find something that suits your needs. There are plenty of high-spec cars to go round and lots of cheaper editions, too. Unlike some of its rivals, it offers a four-wheel-drive option, which provides extra security in slippery conditions. Buying the right engine and gearbox for your needs is key; the newer engines are a big improvement over the older ones, while the Mokka X has a far better cabin than the Mokka. Having said that, neither version will raise your pulse, but you do get a lot for your money.

Vauxhall launched its first SUV way back in 1991. But while the Frontera was reasonably capable off road, it was unsophisticated and was never sought after by new or used buyers.

In 1994 the now-forgotten Monterey (a rebadged Isuzu Trooper) arrived, then in 2007 the Antara appeared. It hung around for eight years then disappeared, mourned by few.

When the Mokka reached showrooms in 2012 it was about time Vauxhall enjoyed some SUV success, and despite some underwhelming engines, the car has gone on to sell well thanks to a booming mini-SUV segment. Updates along the way have made the Mokka a little easier to recommend, too.

The Vauxhall Mokka was first produced in 2012 to combat the success of other compact crossovers. An updated version, bearing the name Mokka X, is now available to buy, but it’s the original Mk1 that we’re focusing on here. 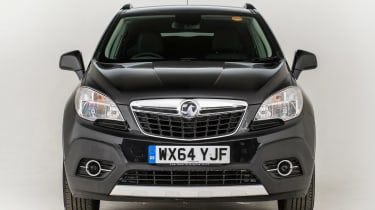 A facelifted car arrived in October 2016, now called Mokka X. Along with a refreshed exterior design, it brought a redesigned dashboard that featured improved infotainment plus a new turbocharged 1.4-litre petrol engine and fresh colour choices, along with optional adaptive LED headlights. 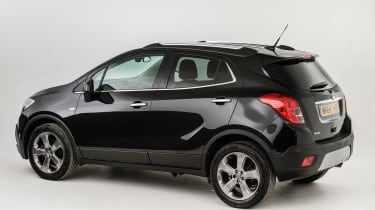 Alternatives to the Vauxhall Mokka Mk1

You're spoilt for choice in this class and that’s the problem for the Vauxhall; the Peugeot 2008 and Renault Captur are just as capable, and are better value.

We’d give the Ford Ecosport a miss, though; it’s not up to the brand’s usual standards. Instead check out the Mazda CX-3, which is great to drive, well made and well equipped, but you’ll pay more for one than for an equivalent Mokka. 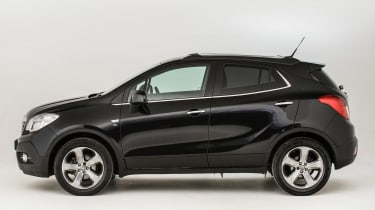 Don’t overlook the Nissan Juke, which still looks distinctive, but isn’t as polished as you might expect. If you’re buying something fairly new, also consider the SEAT Arona, which has a smart cabin, neat styling and efficient engines.

Handbrake Some owners have had problems with the handbrake not holding their Mokka securely when on a steep incline.

EngineSoftware issue can cause 1.4T engine in the Mokka X to hesitate when pulling away.

HeadlampsAdaptive headlights are brilliant, but can cause problems, particularly with early cars.

CabinRattles can come from front windows, the storage tray under the passenger seat or the clutch pedal relay. 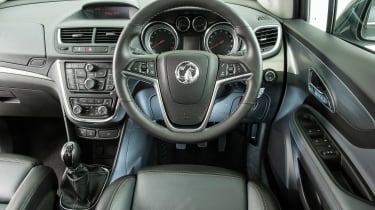 The Mokka X’s dashboard is much more modern than the Mokka’s, but both models feature comfortable front seats with plenty of adjustment. Rear-seat legroom is tight for adults and it’s a squeeze fitting three in there, but it’s fine for children. Boot space is no better than average, at 356 litres with the seats up or 1,372 litres with them down.

Every Mokka needs maintenance after 12 months or 20,000 miles. Check-ups alternate between minor and major, and these cost £159 and £249 respectively.

Pay £279 every six years or 100,000 miles for a new cambelt with the 1.6-litre petrol or 1.7 CDTi engines; the 1.4T and 1.6 CDTi motors are chain-driven. There’s no set interval for replacing coolant, but fresh brake fluid is required every two years, although the cost of this is already included in the service price. 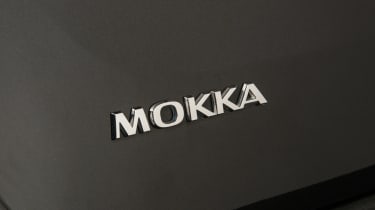 The first of five recalls came in March 2013 because steering wheels could detach. Seatbelt pre-tensioner glitches resulted in a second campaign in August 2015.

Water leaks into an ECU led to the third in July 2016; the fourth was in November 2016 for brake light issues on cars with an integrated bike carrier. The latest action came in March 2017 because of a potential airbag fault.

For what is now quite an old car, the Mokka did well to achieve a 25th place in our Driver Power 2018 survey. The undoubted high spots are the model’s infotainment systems, plus the cabin and comfort, both of which got top-10 placings; safety scored well, too. Owners are less impressed by its practicality, however.