We travelled to Sao Paulo to drive the Ford Fiesta-based SUV, ahead of its UK launch in 2014 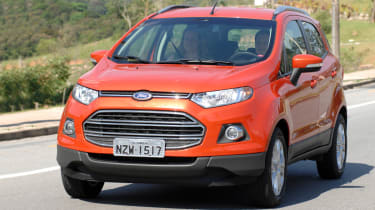 We knew the Fiesta DNA meant the EcoSport would be lively to drive, but what we didn’t expect was the attention we’d get. By combining the Fiesta’s playful character with increased dimensions and a fantastic elevated driving position, the EcoSport oozes star quality. It’s a shame the 2.0-litre petrol engine felt sluggish compared to the rest of the package, and that some of the interior trim felt cheap. Both those issues should be resolved by the time it reaches the UK.

Small SUVs are definitely the flavour of the month. Volkswagen introduced the Taigun Concept at the Sao Paulo Motor Show this week, while Nissan revealed the Extrem Concept – a sporty urban crossover.

But Ford is one step ahead – the EcoSport made its public debut almost a year ago, and it’s recently gone on sale in Brazil. While in Sao Paulo for the show we took the opportunity to take a test drive, 18 months before the EcoSport goes on sale in the UK.

The EcoSport was designed, engineered and is now built here in Brazil. Initially it will be produced in India, China and Thailand, too, but the Brazilians very much see this as their baby, and driving around Sao Paulo it shows. Everywhere we go Paulistas grin, stick their thumbs up and snap away on their camera phones – all offering their seal of approval for our bright red SUV.

It’s unlikely to cause a similar stir on UK streets, but the EcoSport is a well-resolved design, retaining just enough of the Fiesta’s sportiness with a gentle increase in size. In fact it’s 291mm longer (with a 32mm longer wheelbase), the same width and 215mm higher than the Fiesta hatchback.

One feature that’s likely to grate with UK buyers is the spare wheel mounted on the side-hinged tailgate – a feature reminiscent of an early nineties Suzuki Vitara. Ford was keen to point out that it can be removed, but that leaves the question, why not just fit a standard tailgate in the first place? Still, it certainly gives the EcoSport a distinct personality and a handy bumper when you’re reversing in tight spots.

The interior should be familiar as it’s lifted straight from the UK’s besting selling car. Our test car was in top-spec Titanium trim so came with masses of equipment, including climate control, push button start and leather seats. There was no sat-nav, but it did come with Ford’s Sync software which allows to you to make calls via Bluetooth and connect your MP3 to the stereo – both handy features when you’re sitting for hours in Sao Paulo’s famous traffic jams.

Those few extra mm added to the wheelbase make all the different for rear passengers – there’s plenty of legroom for adults to sit behind adults – and front passengers are treated to fantastic elevated view of the road ahead. It’s easy to see why small SUV’s are so popular, you simply feel safer and more in control. Swing the tailgate open and there’s 362 litres of boot space – 67 litres more than the Fiesta – and that increases to 705 litres with the rear seats folded down.

Out test car came with a 2.0-litre petrol engine under the bonnet, although a 1.6-litre unit is also available in Brazil – both are capable of running on petrol or ethanol. Fortunately neither of these engines will be offered in the UK, because without a turbocharger to help out the engine was reluctant to rev and felt out of character with the rest of the car.

Just like the Fiesta hatch, the steering is light and accurate, the manual gearbox has a snappy action and it feels agile in corners, despite noticeably more body roll. The suspension is firm, but it’s an acceptable pay-off for retaining that unmistakeable sense of fun from the Fiesta.

UK buyers will have the option of the superb 1.0 EcoBoost engine, with either 99bhp or 118bhp, or the strong 94bhp 1.6 TDCI. From next year you’ll be able to order the Powershift double-clutch automatic gearbox and four-wheel drive (both options shown for the first time at the Sao Paulo show) as well, but our advice is to keep it simple. With the 1.0 EcoBoost engine fizzing away under the bonnet the EcoSport will be able to add fun to the practicality and desirability it already has in spades.