Everything you need to know about Infiniti's Approved used car scheme 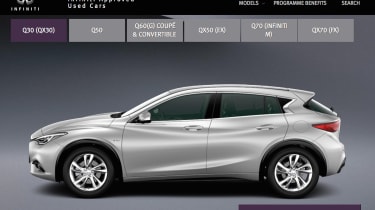 It’s six years since Infiniti launched in the UK with its EX and FX SUVs. As relatively few cars have been sold, it’s no surprise that the approved used website doesn’t offer much stock; there were 251 models when we checked, more than half of which were Q50 saloons. The cheapest car available was a 2014-registered Q50 for £14,495; the oldest was a 2011 FX for £15,995.

To reflect its premium aspirations, Infiniti has put together a decent package that manages to distance itself from most mainstream rivals. The breakdown cover package is twice as long as most, at two years, as is the two-year, 60,000-mile warranty. There’s a 30-day/1,000-mile exchange plan, and checks are made to ensure cars aren’t subject to outstanding finance, haven’t been stolen or involved in a crash.