Revised lights front and rear mark out Land Rover, while a new diesel will also feature. 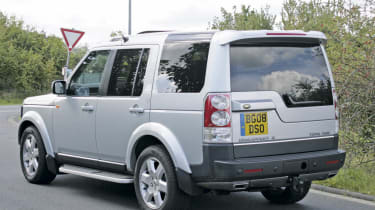 It’s the face of things to come from Land Rover! These are the first pictures of the new-look Discovery, due on sale in 2009.

The SUV was spotted testing near the firm’s headquarters in Warwickshire, complete with revised headights and front and rear bumpers. Square foglamps have been introduced, and the tail-light clusters feature a much sportier look. Faired-in exhaust pipes have been included, so engine improvements might also be on the cards.

According to our spies, the car is due to appear at the New York Motor Show on 19 April, where its luxurious interior will be revealed.

The existing 4.2-litre V8 and 3.0-litre V6 petrol engines will be carried over, and joined by a fresh 3.0-litre V6 diesel. This six-cylinder powerplant is being developed in conjunction with Jaguar, and will also appear in its acclaimed XF executive car.

The unit will deliver more power and better economy, while improvements to the six-speed auto box are set to cut CO2 by a further five per cent. Despite this move into greener territory, there are no plans to offer the stop-start technology fitted to the Freelander TD4.e.

Prices for the new Discovery have still to be confirmed, but a small increase is likely.