How to replace the crankcase breather valve 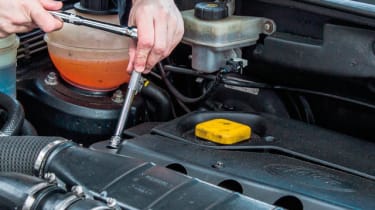 The Freelander 1’s BMW-sourced  four-cylinder Td4 diesel engine is a simple motor to service yourself, as we saw in our service guide last month. In many ways, the top-mounted oil filter and the easily-accessible air filter mean the hardest job is removing the numerous fittings to enable the engine sump guard to be removed, just to access the sump drain plug. One small service job that often gets overlooked though, is the crankcase breather element. This breather system is also fitted to the Td6 diesel in the early L322 Range Rovers introduced in 2002, so all this applies to both vehicle types. Correctly called the Positive Crankcase Ventilation (PCV) element, its job is to catch any oil in the breather system, and return it to the engine, thus helping to reduce emissions.

Although the Td4 and Td6 systems are relatively sophisticated, the idea has been around since the 1960s, when the breathing systems of engines were identified as a major source of hydrocarbon emissions. Until then, engine breather pipes simply vented to the engine bay, and from there directly into the atmosphere. By fitting a PCV, hydrocarbons were reduced, and the engines ran cleaner, aiding oil life and engine health. Hence, since the early 1960s, PCVs appeared as a common fitment. On Land Rover and BMW service schedules, the breather wasn’t mentioned as an item to change until 2007, when BMW realised the significance it played in the long-term health of the engine.

From then on, it was noted to be renewed every 12,000 miles, but by then, the earliest Td4s were heading for six years old. The original filter, shared with the Range Rover application, was a simple foam cylinder. This could be rinsed in petrol to clean it, or ideally, replaced with a new one. But on many vehicles, this task was overlooked. Over time, the foam filter could block up, causing pressure to build up in the engine crankcase, which then looked for the easiest way out. That increased running pressure could cause turbo issues, poor running, exhaust smoke or, if the dipstick was removed when the engine was running, much of the oil spewing out from the dipstick tube as the only outlet for the built up pressure! 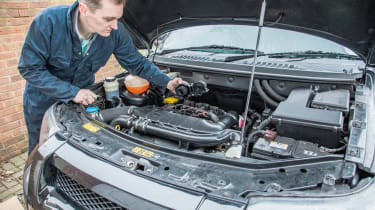 Should the turbo seals fail, and oil reach the air intake, the engine could run on its own oil - usually to self destruction. If you were quick enough to notice this was happening, then forcing the engine to stall, or blocking the air intake, were the only ways to prevent terminal damage. Fortunately, replacement is one of the easiest tasks, requiring only a few tools, and around 45 minutes. The cheapest option is to replace the foam filter for around £15, but BMW later designed a modified internal for the PCV, consisting of a cyclone oil separator. With this, there is much less to clog or fail, so it’s good for the duration of three routine oil changes according to BMW, compared to 12,000 miles for the foam original.

The Td4 and Range Rover Td6 both share similar PCV arrangements, as you’d expect when both engines are broadly the same – the 3.0-litre Td6 is pretty much the Td4 with two extra cylinders and no variable vane turbo – so this simple task applies to both engines. On a Td6, there’s a little more wiring to move, but it is still very straightforward. You need to go to a BMW dealer or parts supplier, and order it from the part number alone.

There’s no Land Rover reference. It is possible to buy just the modified BMW oil separator – Part No 11127799367 – for around £24, but you can also buy the separator and a new PCV cover  – part No 11127799224 – for £63.95 The cover does house a small hidden spring-loaded valve, which should strictly be cleaned. But to my mind, for the extra money, it is worth replacing it at the same time to keep your vehicle in tip-top condition. A useful by-product of the change is a subtle improvement in performance; this 2006 Td4 Freelander definitely felt more willing to rev with the new parts giving a better-breathing engine. This is an easy DIY job, whether you are cleaning the standard filter element, replacing the standard breather, or fitting the BMW part shown here.

• Wear barrier cream or gloves to protect skin from oils. • Allow the engine to fully cool before working on it. • Wear eye protection if cleaning parts with a brush and degreaser. • Avoid parts falling into the engine (refit the filler cap as suggested). • Carry out such operations in a well ventilated garage or workshop.