Second-generation MG6 unveiled with a new plug-in hybrid powertrain, and it could go on sale in the UK in 2018 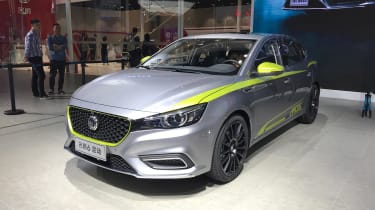 MG’s parent company SAIC has unveiled a plug-in hybrid version of the MG6 saloon at this year’s Guangzhou Motor Show. It'll go on sale in China before a potential UK launch next year.

It is the first of the Chinese-owned British marque’s range of future EV models, with the E-Motion sports car set to launch in 2020. The MG6 uses ‘Green Core’ and ‘Blue Core’ plug-in hybrid technology alongside a 1.5-litre turbocharged engine producing 228bhp and 622Nm of torque. There is no mention of how far the car can travel on electric power alone.

The PHEV MG6 features the brand's latest autonomous technology and on-board entertainment. A 10.1-inch high-definition Internet screen has been fitted alongside a 12.3-inch virtual dashboard. The car also features autonomous parking – accessed via a mobile phone app can be downloaded by the MG driver. The setup can drive the vehicle forwards at low speeds, as well as help the car reverse and steer. 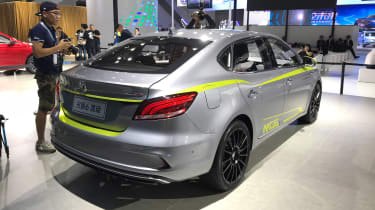 Two months prior to the PHEV launch, the standard MG6 was unveiled on SAIC’s Chinese website. Based on the Roewe i6, the second-generation MG6 features plenty of additional sporty design cues to mark it out as an MG. An aggressive ‘star rider’ grille sits between a pair of LED headlamps, while the two-tone leather interior has been tailored towards the European market.

MG has not confirmed any details on the MG’s powertrain options, but it’s likely that the engine lineup will mirror that of the Roewe i6. That means the saloon should be available with a 164bhp 1.5-litre turbocharged four-cylinder petrol engine as well as a smaller 123bhp 1.0-litre three-cylinder unit.

Would you like to see the MG6 on sale in the UK? Let us know in the comments...