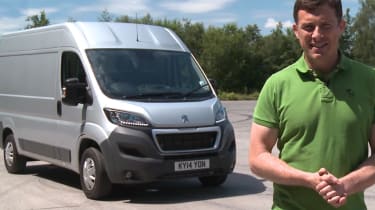 The Peugeot Boxer has been around since 2006, but it’s just received a major overhaul to keep fighting fit and a strong contender in the large panel van class. One of the most noticeable updates is the design. The Boxer now has more modern face, similar to that of Peugeot’s passenger cars, though of course with slightly flattened nose.

You can get the Boxer in four different body lengths and three different roof heights. Gross vehicle weight ranges from three tonnes to just over 4 tonnes, which means that some younger people may need an HGV licence to drive the larger models.

The interior space of the Boxer is one of the best in this class. The door is wide enough for a standard euro pallet to fit in both ways. You can also get another door on the other side for added versatility. All vans come with ply paneling as standard – which well worth having as it helps protect the inside – though you can deselect it if you don’t want it.

The width between the wheels is 1422mm while in the rest of the van its 1870mm, and that's one of the best in the large panel van class. Combine this interior heights of up to 2172mm and total load volumes go from 8m3 in the smallest model to 17m3 in the largest Boxer. Payloads range from 1115kg to 1900kg.

The Boxer has some new rear hinges, which have been designed to be even more robust than before. As standard they open to 180 degrees but you also can get some which open to 270 degrees.

Inside, the Boxer features a redesigned dash with big chunky buttons and a new steering wheel, though the quality can’t match some of its rivals. However, in a first for large panel vans, the range-topping professional model gets a 5-inch touchscreen as standard, complete with integrated sat-nav. The Professional model also boasts parking sensors.

Storage is impressive thanks to a couple of glove boxes – one of which is lockable - double door pockets, large roof bins, and a tray under the driver’s seat.

The double passenger seats comes as standard, though you can have a single one if you like as a no cost option.

It’s a bit fiddly to raise the height of the driver’s seat – you have to use two levers. Also, you can’t alter the height of the steering wheel, only the reach, and it’s actually a little off-centre so you can feel twisted in your seat.

The Boxer is available with a 2.2-litre diesel engine in 110, 130 or 150 guises. Carbon Dioxide emissions are as low as 180g/km while economy ranges from 41.5mpg in the smaller vans to 37.7mpg in larger Boxer models. You can even get a 3.0-litre diesel that has 180bhp and plenty of punch for very little trade-off in economy.

ESP electronic stability control with Hill Start Assist is standard equipment on the latest Boxer, along with an ABS braking system with Emergency Brake Assist. You can also get lane departure warning as an option and it’s standard on larger models.

A driver’s airbag is standard but you’ll need to pay extra for one for the passenger and curtain airbags . As for reliability – the Boxer has been around for a while now and there are no major faults reported.

The Boxer has a turning circle between kerbs ranging from 11.26m for the shortest van to 14.24m for the longest model.

The handling is surefooted and the van feels very stable at speed. The suspension is comfy enough though the ride can get a bit jittery on poorer surfaces – though to be fair this is a bit extreme.

So what do we think of the Peugeot Boxer? Well it has a good range of body sizes, economical engines and impressive equipment. As for the negatives the 2.2-litre diesel engine is a bit noisy, the driving position is slightly off-set and the cabin quality isn't as good as the best in class. However, these are only minor niggles and overall the updates to the Boxer ensure it is still a compelling choice in large panel van class. 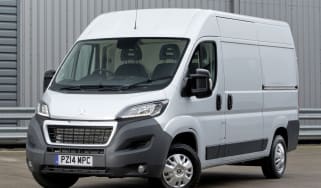 The Peugeot Boxer van has been around for some time, but latest Euro 6 engines help it take the fight to newer rivals
New Torsus Praetorian School Bus is £330,000 off-road specialist