The Peugeot Boxer van has been around for some time, but latest Euro 6 engines help it take the fight to newer rivals 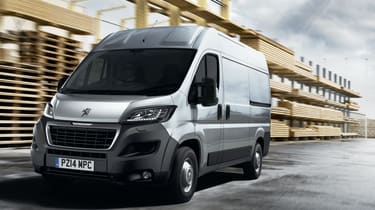 The Peugeot Boxer is the biggest panel van for sale in the company's line-up. It's been around for a while, but updates in 2014, 2016 and 2019 have kept it competitive in the class. The most recent update added Euro 6 engines that are compliant with the most recent emissions legislation, while Peugeot is also introducing electric drive to the range as an off-the shelf model, as opposed to an aftermarket conversion.

Although the Boxer has been around for a while, the latest engines mean it remains a worthy contender in the large panel van sector. It won't knock you out with the driving experience - it still can't rival younger models like the slick Ford Transit, latest Vokswagen Crafter or tech-heavy Mercedes Sprinter - but in terms of overall price, specification and practicality, the Boxer can still impress in places.

Other contenders include the Renault Master and the closely related Vauxhall Movano and Nissan NV400, while the Peugeot has its own joint-venture stablemates - the Citroen Relay and Fiat Ducato – while the LDV V80 is a large van available for the price of a small van.

While the running gear has been consistently updated, the Peugeot's look has remained largely unchanged. It's distinctive, with a floating grille, stylish headlamps and optional LED running lights. The van’s designers also turned their attention to the interior, with improvements to both the quality of fit and finish, and the addition of lots more equipment, although these days the Boxer can't match the likes of the Crafter, Transit or Sprinter for cabin quality or tech. The engine line-up has been completely refreshed and a variety of modifications introduced to improve the Boxer’s durability.

The Boxer range is wide and varied, providing operators with a choice of panel van payload capacities ranging from 1,125kg up to 1,570kg. Load volumes extend from 8 cubic metres in the L1 H1 (short wheelbase, low roof) model to 17 cubic metres in the L4 H3 (extra long wheelbase, high roof) version. Along with the panel vans, Peugeot offers the usual mix of chassis cabs, tippers, drop-side trucks and crew cabs, that can be adapted to operator needs. Depending on which model you go for, there’s a choice of S, Professional, Grip and Asphalt trim levels.

The most recent update to the Boxer saw a 2.2 BlueHDi diesel added in 120 and 140 guises. These have 118bhp and 138bhp respectively, and come with a six-speed manual gearbox as standard. This boosts efficiency, as does the standard-fit stop/start system. There's no automatic gearbox option, but the Grip model adds hill descent control, toughened suspension, under body protection and all-season tyres as standard.

Overall, the Boxer isn’t quite as slick to drive as the Ford Transit or Mercedes Sprinter, but it can match those models in terms of practicality and user-friendliness. Where it gains an edge is on the equipment list with Peugeot’s generous specifications, even on the entry-level vans, sure to appeal to buyers.

With the arrival of the latest Euro 6 emissions legislation, the Boxer engine range has been reduced to two options. The 120 and 140 engines offer 118bhp and 138bhp respectively, although the smaller motor is only available in the smallest L1H1 body configuration.

Combined fuel economy on the latest WLTP test cycle sees the 120 BlueHDi return up to 34.9mpg, while the 140 BlueHDi isn't far behind at 34.3mpg. In that case, we'd go for the more powerful motor every time. Stop-start is fitted as standard on both engines, and this helps CO2 emissions range from 153-175g/km, depending on panel van size and configuration.

All Boxers drive through a six-speed manual gearbox to the front wheels only. There is no automatic transmission option. The standard Boxer panel van comes with a steel bulkhead between load space and cab, which provides an element of safety and security. Deadlocks are fitted as standard too, and if you opt for the popular Professional trim level an alarm comes as part of the package. The alarm is otherwise optional, but all models come with a Thatcham-approved immobiliser, remote central locking and a locking fuel cap.

The Peugeot Boxer has a 90-litre fuel tank. 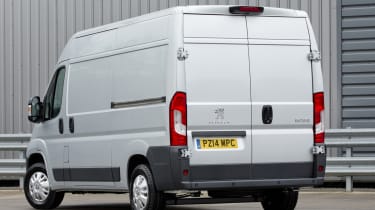 The Boxer’s extensive body range means there's a van avaibale to suit most needs. Four body lengths and three roof heights are becoming the standard for vans of the Boxer’s size and it makes the Peugeot suitable for a wide range of applications.

Outside panel vans, the Boxer is a popular base for motor caravan conversions, too. The gross weight range extends from 3,000kg to 3,500kg.

Along with the Fiat Ducato and Citroen Relay, the Boxer offers one of the widest load space widths in its class at 1,870mm, while the tallest H3 model offers an interior height of 2,172mm.

The Boxer offers a generous 1,422mm between the wheel arches, so will easily accommodate a Europallet widthways. Similarly a side-door width of 1,250mm should permit pallet loading from the side door. A full-height steel bulkhead is standard equipment too. 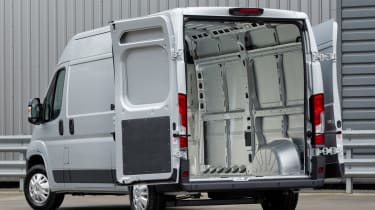 A nearside sliding load door is standard and a second sliding door on the offside is an option. At the rear, the doors open to 180 degrees as standard and the Peugeot offers 260 degrees opening rear doors on the options list. Central locking is standard, making it easier to secure the van when loading and unloading.

The Boxer has been around for a while now and appears to be generally reliable, with no particular major faults reported. The latest diesel engines will have to build up a reputation for reliability, although as they're based on older engines, there is some tried-and-tested technology on offer. In the latest facelifted vans a number of features have been redesigned to improve durability including a strengthened body structure and new load bay door mechanisms. The revised van was driven over 2.5 million miles as part of the testing process.

ESP electronic stability control with Hill Start Assist is standard equipment on the Boxer, along with an ABS braking system with Emergency Brake Assist. There’s a driver’s airbag included as standard too but you’ll have to explore the options list for passenger and curtain airbags. The big four-tonne Boxers also get a land departure warning system as standard but this must be specified as an option on smaller vans. Go for a Grip model, and Hill Descent Control and all-season tyres are fitted for improved performance on building sites and the like. 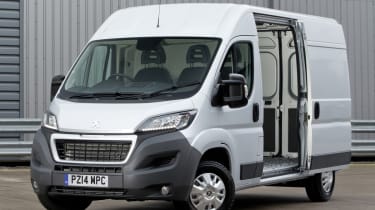 The 2.2-litre diesel pulls well, with 310Nm and 340Nm of torque on offer for the 120 and 140 engines respectively. The six-speed gearbox is a little vague and rubbery in its shift, but the decent torque figure means you don't need to row the gears unless you're in a van powered by the less powerful engine and are carrying a full payload.

The Boxer drives well enough with light, well-positioned controls and good visibility out of the front from one of the highest driving positions of any van currently for sale. The ride quality is passable, but the Boxer is showing its age when compared to newer rivals, with more bounce when unladen, and more body roll in corners when compared to vans such as the VW Crafter.

There’s a range of height adjustment for the steering wheel and the driving position is generally good, although other rivals such as the Mercedes Sprinter and Volkswagen Crafter offer more comfortable seats. 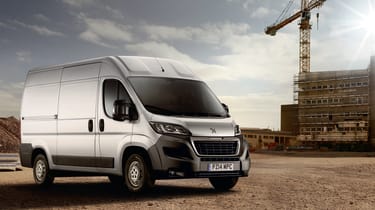 The Boxer cab includes plenty of stowage space, including two large glove boxes, one in the centre of the dashboard and the other in the usual place on the passenger side. The dash moulding includes a number of additional storage options on top of the dashboard plus there are large door bins, storage space under the seats and a shelf above the windscreen. The Boxer takes some beating when it comes to laying on places to keep your stuff. 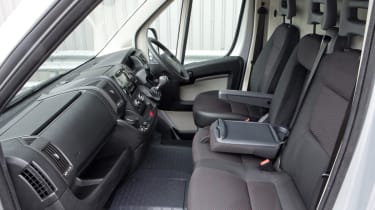 A dual passenger seat is standard, with a single passenger seat as a no-cost option. The dual seat includes a pull-down table top in the back of the middle seat for completing paperwork. All models get DAB radio with Bluetooth and USB inputs along with electric heated door mirrors and deadlocks. The Professional trim level adds cruise control, manual air conditioning and satellite navigation.

The latest Boxer models feature a redesigned steering wheel with big, chunky buttons and updated controls on the dashboard. The plastics used in the cabin are hard but durable while the touchscreen system works well while adding a real air of quality to the interior.

There are new audio systems and an optional 5” colour touchscreen display, which serves as the sat-nav monitor in Professional vans. Peugeot offers reversing sensors as standard on the Professional too, but there’s also an impressive reversing camera system on the options list. Mounted on the top of the van, the camera gives a bird’s eye view of what’s directly behind the vehicle and could be invaluable in avoiding parking knocks. 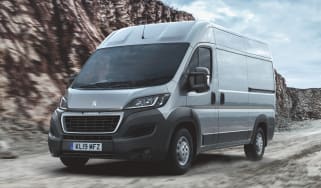 An updated Peugeot Boxer panel van has been revealed, with an all-electric powertrain set to join the range by the end of the year
Peugeot Boxer gets power boost with new Euro6 engine 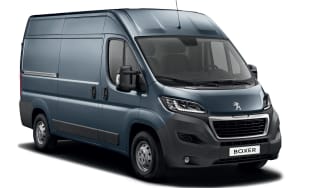 The Peugeot Boxer is now available with the latest BlueHDI 2.0-litre engine that comply with the Euro6 emissions standards
Peugeot Boxer video review 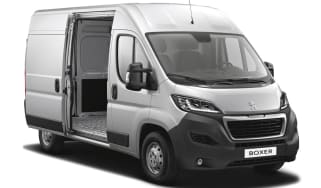