The Fiat Ducato panel van has low running costs and lots of tech, plus a range of fuel efficient Euro 6 engines 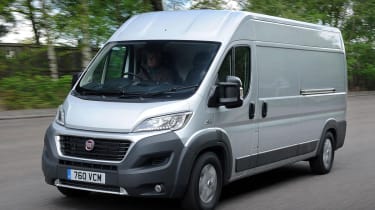 Fiat has been a major player in the European commercial van sector for well over a century, and for the last 35 years it’s the Ducato panel van that has been the flagship of the range.

In the firm’s home market, Ducato is as much of an icon as the Ford Transit is here, but the van is popular with UK buyers too. One of the reasons is the Ducato’s terrific fuel economy, which makes the van popular with all types of users, from big fleet operators to motorhome conversion companies. Thankfully Fiat has been able to maintain this efficiency with its latest range of Euro 6 engines.

The current Ducato is built as part of a joint venture production with the PSA Peugeot Citroen group, so it uses most of the same technology and engineering as the Peugeot Boxer and Citroen Relay. They’re all built on the same production line at the Italian SEVEL Sud factory, which is one of the world’s biggest light commercial vehicle factories with the capacity to build a quarter of a million vans every year.

Apart from its joint venture rivals and the aforementioned Transit, there are plenty of other contenders in the Ducato’s market segment – not least the Vauxhall Movano and Renault Master, the Mercedes Sprinter and our current  favourite in the class, the Volkswagen Crafter. 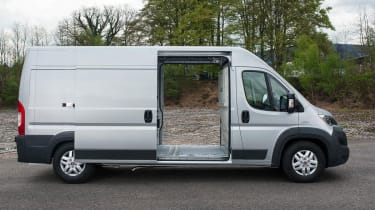 Today’s Ducato range is powered by a line-up of Fiat’s Euro 6 Multijet II common-rail diesel engines. The previous 2.3-litre and 3.0-litre units have been replaced by a downsized 2.0-litre offering 115hp and 2.3-litre engines packing 130hp, 150hp and 177hp. The 150hp motor can also be had in EcoJet trim, with Start&Stop, a smart alternator, electro-hydraulic power steering and an Eco function, to reduce fuel further. Crucially, the 2.3-litre unit that’s the mainstay of the range is one piece of Ducato tech that isn’t shared with its Peugeot and Citroen equivalents.

As mentioned, fuel economy is a strong point for the Ducato, and it's one of the most economical panel vans available - capable of returning up to 47.9mpg, with emissions of 157g/km. That’s with the standard 6-speed manual gearbox, though there is the option of a Comfort-Matic automated manual on all models except those with the entry-level 115bhp engine.

There are numerous configurations available in the Ducato range, which can be confusing. The line-ups overlap, with the standard Ducato ranging from L1H1 to L3H2 models and the heavy-duty Ducato Maxi from L2H2 to L4H3. In addition, there are window van, dropside truck, tipper, combi and minibus versions, plus the Ducato is a very popular choice for motorhome conversions.

A six-speed manual gearbox is standard, taking drive to the front wheels. However 130-177hp engines can also be supplied with an optional six-speed Comfort-Matic automated box, for an additional £1,700.

A series of steps have also been taken to enhance the durability of the latest Ducato models. Service intervals are up to a lengthy 30,000 miles thanks in part to upgraded brakes, a new clutch system and tweaked front suspension. Additional body reinforcement and upgraded door hinges are amongst the measures designed to prolong the life of the vehicle. 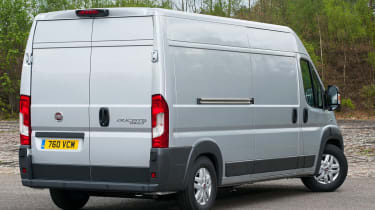 Security is taken care of with standard-fit deadlocks, a secure steel bulkhead between the cab and load area, and a locking glove compartment. You'll need to pay extra for an optional alarm system, unless you opt for the higher specification Tecnico trim.

A huge range of dimensions provide load capacities that cover the whole large van class, from 8.0 up to 17.0 cubic metres of space. The gross weight range extends from 3,000kg to 4,250kg as well, providing plenty of choice for customers. That maximum is beyond the LCV licence threshold of 3,500kg, above which motorists would need an HGV licence if they passed their driving test after 1 January 1997, but covers minibuses which are allowed to run at the higher weight.

Fiat has divided the range into lighter Ducato and heavier Ducato Maxi models, with the former comprising SH1 to LH3 versions and gross vehicle weights between 3,000kg and 3,500kg. 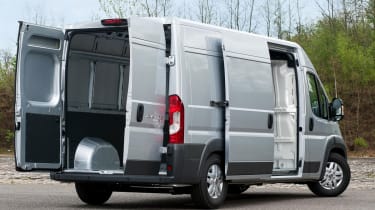 The Ducato Maxi range overlaps with the Ducato range, taking in MH1 to LXH3 models at 3,500kg, 4,005kg and 4,250kg GVW. Payloads from 1,155kg to a maximum of 2,115kg are available and all Ducatos get a full height metal bulkhead as standard. Fiat is very pleased with the square dimensions it’s managed to achieve in the Ducato’s load bay and the 1.42m loading width between the rear wheelarches ensures that bulky items can be slid inside with ease.

The Ducato has a loyal following among van buyers, and this is largely down to the strong reliability record of its Fiat engines. On the safety front there’s a driver’s airbag, ABS with EBD and ESC stability control as standard.

A range of other electronic driver aids are also built-in to the ESC system including Roll-Over Mitigation and Load Adaptive Control which are specially designed to increase the stability of the van. A hill holder system and ASR anti-slip regulation are also included but buyers will need to explore the options list to add a passenger airbag. 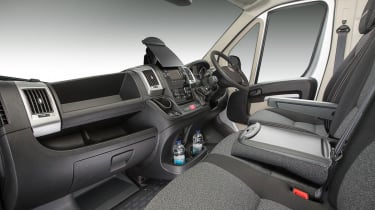 If you want more safety technology in your Ducato there’s a traffic sign recognition system that reads road signs and warns of speed limits and no-overtaking zones. The Lane Departure Warning System alerts drivers when they wander out of their lane without indicating by sounding the kind of buzzer that belongs in a fighter jet’s cockpit. It’s so loud you wonder if a heat-seeking missile has locked on to the Ducato’s tail or if you’ve accidentally primed the ejector seat. Most drivers will end up turning it off, not so good for a safety aid.

Fiat’s MultiJet II engines are the main distinguishing feature versus the Citroen Relay and Peugeot Boxer and they provide a valuable unique selling-point for the Ducato. The 130bhp power option that most buyers will choose develops maximum torque of 320Nm and is a smooth, unflustered companion on the road. Even at the top of the rev range the engine’s deep hum never sounds harsh and noise levels are lower than many competitors.

The flagship 177bhp 2.3-litre unit is similarly refined but is only available in larger models, so will mainly be chosen by operators who regularly carry heavy cargos. With a modest weight on board the difference in performance over the 130bhp and 150bhp 2.3-litre engine isn’t huge. 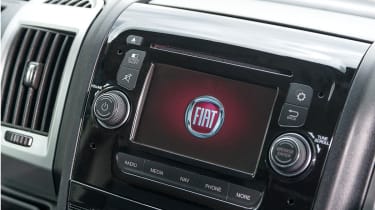 The six-speed manual gearbox is slightly notchy in feel but it’s well positioned and contributes to a comfortable driving position. Very tall drivers may struggle with the lack of seat adjustment and the seats could use more side support, but generally the Ducato is comfortable enough. The Comfort-Matic auto works well and suits the relaxed high-torque character of the Ducato’s engines. Its responses can get a little sluggish if you try to press on, so your best bet is to take things easy.

In general, the Fiat Ducato driving experience is pretty good. The van isn’t as composed as the best in the sector over bumpy surfaces or when there’s no weight on board to subdue the heavy-duty suspension but the well-weighted steering and good visibility make it pleasant to use. The large door mirrors incorporating a wide-angle lower mirror that can be adjusted individually are a particularly good bit of design.

The Ducato’s dashboard feels durable enough – if not quite up to the standard of rivals from Mercedes, Volkswagen and Ford. Some of the plastics on the inside of the doors feel a little flimsy and the dash-mounted clipboard that morphs into a holder for your mobile phone or tablet computer doesn’t seem very durable and can result in a persistent rattle. 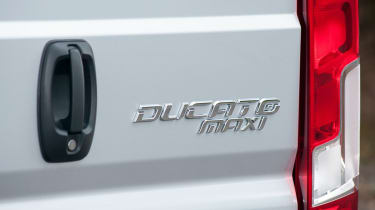 There’s plenty of storage space in the Ducato though, with a large glovebox, numerous cubbyholes, deep door pockets and under seat storage. Fiat also now offers a classy-looking touchscreen infotainment system that's a bit small but works well, although we wonder how its piano black trim surround will stand the test of time.

In general, the quality of the cabin and its switchgear has been significantly improved in this version of the Ducato. The best rivals do a better line in perceived quality but for user-friendliness the big Fiat is up with the best.

The pure-electric Fiat e-Ducato panel van is on sale now with a starting price of £47,675 and a maximum range of 192 miles
2020 Fiat Ducato van pricing revealed 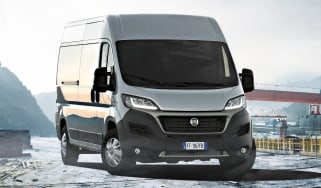 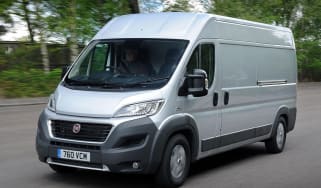 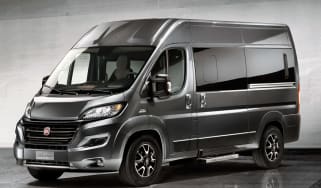