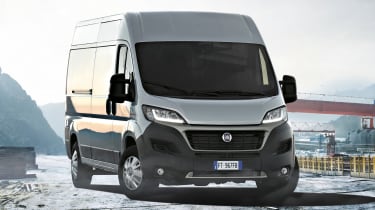 The new Ducato is powered by Fiat’s latest turbocharged 2.3-litre four-cylinder MultiJet diesel engine, available in four states of tune. The entry-level version is only available on the short-wheelbase panel van with a six-speed manual gearbox, and produces 118bhp and 320Nm of torque.

Fiat also offers two mid-range engines, which are available across the rest of the Ducato’s line-up. The lesser-powered version produces 138bhp and 350Nm of torque, while a more potent variant offers 158bhp and 400Nm of torque. Both models can be had with either a six-speed manual or a new nine-speed automatic transmission. 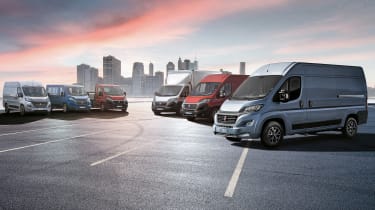 The most powerful model in the Ducato’s line-up comes with 178bhp. Torque figures are dependent on the gearbox, with the six-speed manual version being offered with 400Nm and the nine-speed automatic model coming with 450Nm. Like the mid-range models, its available as a panel van, crew cab and tipper truck.

All engines are Euro 6d-temp compliant, with stop-start and a smart alternator being offered as standard across the range. Owners can also specify the idle speed of the engine, allowing any additional electrical equipment, such as power tools or lights, to be powered by the van when parked.

Elsewhere, the new Ducato comes with an updated seven-inch infotainment system, offering support for Apple CarPlay and Android Auto. The sat-nav can now also be programmed with the vehicle’s dimensions, allowing the system to provide routes which automatically avoids roads that are unsuitable for the van’s size.

The new Ducato is available with a range of driver assistance systems, including blind spot assist, lane departure warning, traffic sign recognition, automatic windscreen wipers and full brake control, which can automatically identify obstacles and apply the brakes, should the vehicle be in danger of crashing.

Fiat has also confirmed an all-electric version of the Ducato will be available to pre-order later this year. It will be launched in 2020, offered to a range of "major clients" in a pilot scheme, which the Italian firm will use to finalise the commercial EV's design.

Now read our round-up of the best panel vans on sale. Let us know your thoughts in the comments section below...