The Czech firm has announced pricing, engines and trim levels for its Ford Focus rival, due to arrive in showrooms this summer 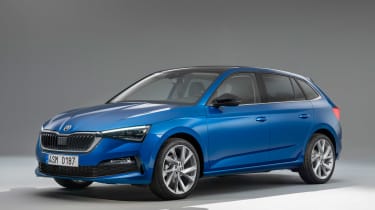 Pricing for the new Skoda Scala has been announced, with the entry-level model starting at £16,595. The Czech firm’s hatchback arrives this summer and will act as a direct rival to the Ford Focus and Volkswagen Golf.

From launch, buyers will have the choice of two petrols and one diesel engine, all of which are familiar units pulled from the VW Group. The Scala’s petrol options start with a turbocharged 1.0-litre three-cylinder, borrowed from the latest Volkswagen Polo, with 113bhp and 200Nm of torque.

The Scala will also be available with VW Group’s turbocharged 1.5-litre four-cylinder TSI engine, as found in the Golf and the Passat, with 148bhp and 250Nm of torque. The only diesel option is a 113bhp 1.6-litre four-cylinder, while later down the line Skoda will also offer a lowered-powered three-cylinder petrol model, with 94bhp. 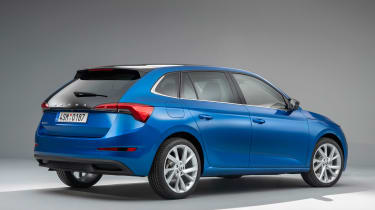 Like the rest of Skoda’s range, three trim levels will be available: S, SE and SE L. As standard, the base model Scala comes with 16-inch alloys, LED headlights, air-conditioning, a leather steering wheel, front and rear electric windows, a 6.5-inch infotainment screen, a range of driver assistance technology and a height adjustable driver’s seat.

The Scala is based on the smallest version of the VW Group’s MQB platform, meaning it’ll share some of its mechanicals with the SEAT Ibiza and Volkswagen Polo. However, the Scala is considerably larger than either of its cousins at 4,362mm, making it more than 10cm longer than a Golf. 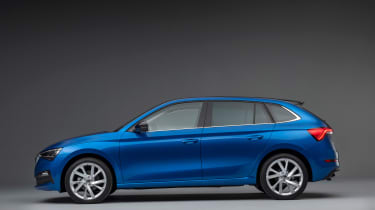 Despite being based on the smallest MQB configuration, the Scala has a 2,649mm wheelbase, which is 12mm longer than a Golf’s, and Skoda claims this translates into competitive amounts of cabin space, particularly for occupants in the rear.

While the new Scala’s styling is clearly derived from the Vision RS concept, predictably the its looks have toned down for the production model. The nose wears the latest evolution of the Skoda grille, and the angled headlights and bumper are designed to replicate the sharp edges of Bohemian cut crystal.

Its side profile is more of a conventional hatchback than the Octavia, with a roofline that tapers towards the rear and then falls sharply at the tailgate. The most notable feature at the back end is the new, spelt-out Skoda name, stretched across the tailgate. should the customer choose the optional ‘glass extension’ (as seen in these initial images), the lettering is mounted directly on to an unusually large screen.

The boot appears to have a relatively flat floor, with only a small lip to load heavy items over. The rear seats are split 60:40, and when they’re folded down the Scala’s boot capacity extends from 467 litres (120 more than in a Focus) to 1,410 litres (an increase of 140 compared with a Golf).

An electric tailgate will be offered as an option, while traditional Skoda Simply Clever features, such as an ice scraper (complete with tyre tread-depth gauge) mounted in the fuel-filler flap and a ticket holder for the driver’s A-pillar, are likely to be standard across the range.

Skoda hasn’t issued official details on the Scala’s chassis configuration, although it’s likely to be standard MQB fare, with MacPherson struts at the front and a torsion beam at the rear. It will be offered with the option of Sport Chassis Control, which lowers the ride height by 15mm, adds adjustable dampers and selectable steering and engine response.

The interior finish should represent a significant step over the budget Rapid Spaceback, with soft-touch materials in key areas and a smart metallic finish across the centre of the facia. There’s ambient lighting in red or white and contrast stitching on the seats. Heated front and rear seats will be available, too, along with a heated windscreen and steering wheel. 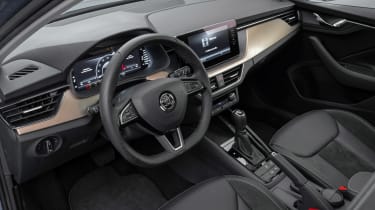 The Scala’s cabin incorporates some of the latest VW Group tech, particularly in infotainment, where its displays sit proud of the dash, like a ‘floating’ tablet. Skoda says that the dash’s shape allows you to balance your hand below the touchscreen, helping you to make more accurate inputs when the car is moving.

A built-in SIM with permanent 4G connectivity allows owners to unlock the model using a smartphone and enables sat-nav map updates to be supplied automatically. The Scala will also be offered with the option of a 10.25-inch fully-digital instrument cluster, while Skoda’s SmartLink+ will brings Android Auto and Apple CarPlay.

Safety kit will include up to nine airbags, LED dipped-beam and daytime running lights (full-LED headlamps will be optional), a rear cross-traffic alert system, lane-keep assist and a rear-view camera with auto parking into parallel spaces and car park bays.

The new Skoda Scala will be available to order in May, with first deliveries expected in the summer. Further information on its economy, performance and emissions will be announced in the next few months.

Are you excited for the new Skoda Scala? Let us know in the comments section below... 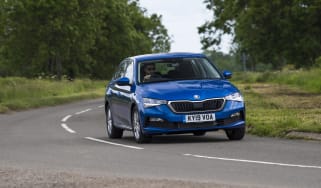 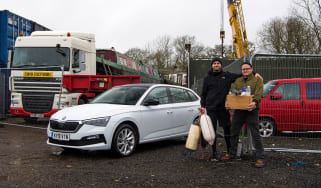 Final report: we loved our Skoda Scala bargain hatch, but it wasn’t all plain sailing