Off-road specialist has unveiled a new variant of the Torsus Praetorian, designed to ferry kids over the world’s most inhospitable school runs 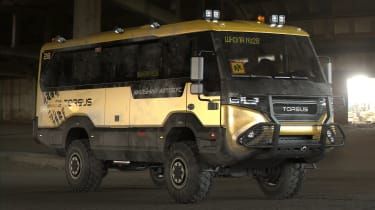 Torsus has launched a new school bus variant of the Praetorian off-road truck. It joins a growing range of Praetorian variants, which currently includes an evacuation ambulance, a rough-and-tough campervan, a mobile command centre and a riot control vehicle.

This new school bus variant is based on the same underpinnings as the standard Praetorian. Prepared for all terrain it comes with locking differentials, long travel suspension, enormous drum brakes and massive steel wheels wrapped in knobbly off-road tyres – all of which are bolted to a heavy-duty MAN truck chassis.

Torsus also says the Praetorian has approach, breakover and departure angles of 28, 41 and 22 degrees respectively  – and, thanks to a series of strengthening beams and brace bars across its axles, the bus can drive over a 33.5 degree camber without toppling over.

The Czech brand has left the standard Praetorian’s engine untouched for this school bus variant which, given the kind of terrain it’s designed to cover, is a sensible move. It’s a turbocharged 6.9-litre six-cylinder diesel unit with 286bhp and 1,150Nm of torque – enough to drag the bus up a 65 percent incline.

Inside, the bus comes as standard with seating for 35 and unique upholstery designed to mimic mathematics and science diagrams. However, Torsus also offers a host of optional extras, including a TV and DVD player, a coffee machine, a fridge and an improved air conditioning system for desert climates.

If you dive deep into Torsus’s other Praetorian specifications, you can easily build yourself a mobile home from home. The options list includes a convection microwave oven, a washing machine, a bathroom compartment and a 10-inch touchscreen infotainment system mounted on every seat in the cabin, which retails for an eye-watering €13,160 (£12,000).

What do you make of the Torsus Praetorian School Bus? Let us know in the comments section below…