The Volkswagen Beetle GSR has been revealed, and it will be limited to only 100 models in the UK 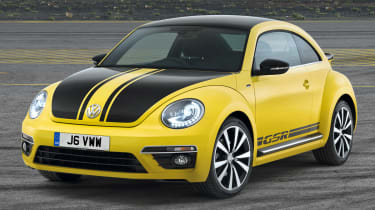 The limited edition VW Beetle GSR is now available to order in the UK. Just 3,500 examples of the Beetle will be offered worldwide, with deliveries of the 100 cars coming to the UK beginning in September.

The original Beetle GSR – short for Gelb Schwarzer Renner, or Yellow Black Racer in German – went on sale 40 years ago. Also limited to 3,500 units, the first GSR featured a matt black bonnet, bootlid and bumpers, and black side stripes above the door sills.

Forty years later, VW has reinterpreted the GSR with its latest Beetle, which first debuted at the Chicago Motor Show earlier this year.

Also painted yellow and black, the new car adds extra GSR lettering, R-Line bumpers and black door mirror caps, although, unlike the original, the new GSR can also be ordered in grey and black.

The new car gets 19-inch alloys instead of the original’s 15-inch wheels, while the new car benefits from black R-Line racing seats, with contrasting yellow stitching, a leather-wrapped steering wheel and a numbered plaque.

The new Beetle GSR is only available with the top-spec 207bhp 2.0-litre turbo petrol engine, which allows the car to complete the benchmark 0-62mph sprint in 7.3 seconds and hit a top speed of 142mph.

VW claims that the Beetle GSR will return fuel economy of 38.7mpg and emit 169g/km of CO2.

The new Beetle GSR can be ordered with either a six-speed manual or DSG gearbox. The manual Beetle GSR costs £24,900, while the DSG version costs £1,500 more.

VW has added that the non-GSR 2.0-litre turbo Beetle will benefit from same 207bhp version of the engine – up from 197bhp now – for cars ordered after 1 May.