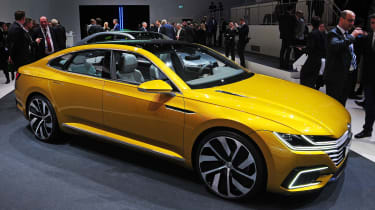 VW has given us a closer look at the replacement for the Passat-based CC with its Volkswagen Sport Coupe GTE Concept at the 2015 Geneva Motor Show. It joins the new Touran, Passat Alltrack and Sharan MPV on the Volkswagen stand.

Seen here for the first time at the VW preview evening ahead of the show, the concept demonstrates a clear relationship to the Passat, but features a more athletic body and coupe-like profile. At the front, a wide grille extends the width of the car and merges with sleek LED headlamps, while LED-framed air vents in the lower section of the front bumper and bulging arches exaggerate the car’s width. 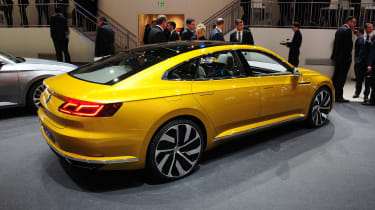 A strong shoulder line runs the length of the newcomer, with a cascading rear end giving the four-door coupe a sports car-like stance. VW has stated the concept is the “champion of a new progressive VW design language”.

Inside, that theme continues, with VW’s current tech-fest approach to interior design.

The Sport Coupe GTE Concept uses a 12.3-inch display for its instruments, but unlike current VW models this features 3D graphics. There’s also a central 10.1-inch touchscreen and two more 10.1-inch screens for back-seat passengers to watch. It’s a suitable amount of technology to match the futuristic design outside.

Beneath the svelte body, VW has confirmed a 3.0-litre turbocharged V6 petrol engine and two electric motors will provide the power, with the concept also using an “innovative four-wheel-drive system”. 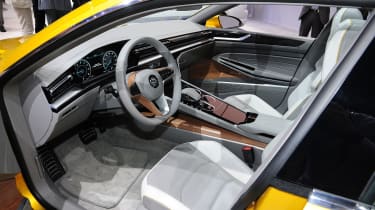 The petrol unit delivers 295bhp, with the front electric motor producing 54bhp and the rear electric drive unit churning out 114bhp to give a total combined output of 374bhp. Thanks to the electric motors, a significant part of the car’s torque output will be available instantly, so performance should be swift off the line, with a sustained shove from that V6 turbo.

A six-speed dual-clutch DSG automatic transmission is standard, and Volkswagen claims the Sport Coupe GTE Concept can sprint from 0-62mph in 5.0 seconds and hit 155mph flat-out.

However, thanks to the petrol-electric drivetrain, the GTE should be relatively efficient, too. Officially, the Sport Coupe returns 118mpg and emits just 46g/km of CO2 – impressive for a big, stylish four-door executive car.

Like its other plug-in hybrid GTE models, VW has equipped the Sport Coupe with a number of driving modes. Hybrid is the default setting, with the petrol engine and electric motors working together to push the car along.

There are no prizes for guessing that E-Mode sees the Sport Coupe GTE Concept run on battery power only for around 32 miles. This uses just the rear-mounted electric motor.

Next up is GTE – this sharpens up throttle response and delivers maximum performance – while Battery Charge/Battery Hold can be used to either maintain battery charge or keep the car in E-Mode when driving in low emission areas like towns and cities.

Finally, there’s a clever Electric Driveshaft four-wheel-drive setting that uses the V6 petrol engine to drive the front wheels and the front electric motor – this then acts as a generator to power the rear e-motor, meaning the Sport Coupe GTE has four-wheel-drive capability even when the battery is empty. 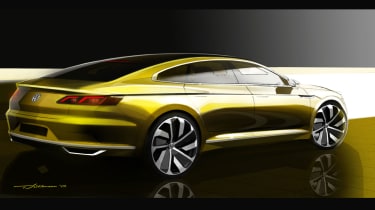 Judging by the styling and innovative tech on the new concept, it’s clear VW is attempting to push the next-generation CC further up the food chain and possibly closer to the Mercedes CLS as a result.

Get the full lowdown on all the new cars at the 2015 Geneva Motor Show...