The four-door Volkswagen CC is a great cruiser, with efficient engines and enough kit to compete with more expensive rivals 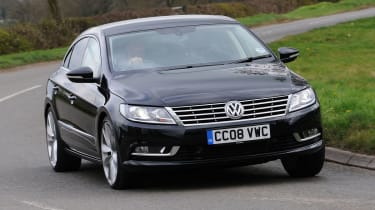 The Volkswagen CC is designed as a premium four-door coupe which challenges the Audi A5 Sportback and the BMW 3 Series. The stylish CC stands out in its class, though, thanks to a facelift in late 2011, which made the nose more imposing and saw the addition of an attractive chrome grille and bi-xenon headlamps complete with LED daytime running lights.

Prior to the facelift, the Volkswagen CC was called the Volkswagen Passat CC, but this name was dropped. The reborn CC gained a sweeping roofline and a neat trim which edged the design past that of the Passat's. There are two trim levels to choose from: the regular CC model and a sporty CC GT version.

With the Volkswagen CC you'll get the option of a crisp 158bhp 1.8 TSI plus a sporty 207bhp 2.0 which turns the CC into a competitive performance car. Opt for the super-efficient 2.0 diesel, though, and keep running costs relatively low. The Volkswagen CC should also hold its value come resale time.

The Volkswagen CC gets the best of the Passat's engine line-up - choose from the 1.4-litre turbo petrol that produces 158bhp or opt for the 2.0-litre TSI turbocharged petrol with 207bhp. There's also a 2.0-litre turbodiesel which comes in 138bhp and 168bhp versions. All models are available with six-speed manual or six-speed DSG automatic gearboxes, while the 1.4 gets a seven-speed DSG. The 1.4-litre petrol will be sufficient for most buyers' needs - it manages 0-62mph in 8.5 seconds and has a top speed of 137mph. Meanwhile, the 128bhp 2.0 TDI reaches 0-62mph in 9.8 seconds and has a top speed of 133mph. All models come with sports suspension, but the top-spec GT model gets adaptive dampers which allows the suspension to be changed between Normal, Comfort and Sport modes. In the latter of these modes, the handling is surprisingly sharp but the steering doesn't match up.

The Volkswagen CC comes with a highly efficient 2.0-litre TDI BlueMotion Technology diesel engine, which returns 61.4mpg and emits just 120g/km of CO2. If you choose to combine this with the DSG auto, you still get returns of 53.3mpg and 134g/km of CO2. Those in pursuit of performance should opt for the GT 2.0-litre TSI petrol engine, which goes from 0-62mph in 7.3 seconds. Be warned, though, it only manages 38.7mpg and if you combine this with emissions of 169g/km you get a very expensive vehicle. Unsurprisingly, the petrol models aren't quite as clean or frugal - the 1.4 TSI manual claims 44.8mpg and emits 147g/km of CO2, and with an auto box these figures change to 45.6mpg and 144g/km of CO respectively. While no version is especially cheap to insure, the more powerful 2.0 TSI petrol gets the highest insurance group of the range.

The Volkswagen CC is available in two specifications - entry-level, regular CC and top-spec CC GT. Both versions feature an upmarket chrome grille, a smart lower bumper and LED daytime running lights incorporated into piercing bi-xenon headlamps. The premium look is completed by scalloped sides, a sweeping roofline and further LED lights at the rear. The interior, unsurprisingly, looks pretty similar to the Passat's, meaning the controls are simple and easy to use. The interior also features an analogue clock which was sourced from the latest Volkswagen Phaeton luxury saloon and the top-spec CC GT model comes in a range of Nappa leather finishes. The sporty GT versions also get 18-inch alloys, heated front seats, cruise control, plus front and rear parking sensors. The entry-level CC still comes with a generous amount of equipment, though, with 17-inch alloy wheels, Bluetooth, DAB radio, automatic wipers, front sports seats and dual-zone air-con. Special seats are also available with a massage function. On top of this, buyers can specify an automatic tailgate which opens when you wave your foot under the rear bumper.

Following the redesign of the CC, Volkswagen placed more importance on style than they did on the practicality factor. The new sweeping roofline, for example, really does intrude on headroom in the rear. While the original Passat CC had two individual back seats, this one gets a three-seat rear bench and passengers will agree that the central seat is very cramped. Despite the cars larger dimensions, boot space doesn't match up to the Passat saloon - the CC only offers 452 litres worth of space. Having said that, the back seat splits and folds - at the simple touch of a button located in the boot - to allow owners to carry awkward sized items. Plus, the CC has an impressive towing capacity of 1,800kg. There's also a range of storage cubbies including a refrigerated glove compartment.

As the Volkswagen CC is fairly uncommon on UK roads, it hasn't featured yet in our Driver Power customer satisfaction survey, but Volkswagen did achieve a solid ranking of 16th in our list of top manufacturers. Plus, the previous generation Volkswagen Passat CC finished an impressive 34th in the 2013 Top 100 survey. The Volkswagen CC hasn't been put through the rigors of a Euro NCAP crash test yet, either, but the Volkswagen Passat - on which it is largely based - was awarded with the full five-star rating. Volkswagen also offer an abundance of hi-tech safety accessories available as options, including fatigue detection, active head restraints, a blind spot warning system and lane keep assist. Meanwhile, autobrake brings the car to a halt at low speed if it senses an imminent collision. Further to this, drivers can specify automatic adjustment of the headlight beams, and there's a system that recognises road signs and displays them on the dashboard. 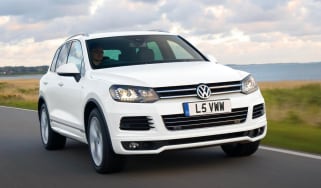 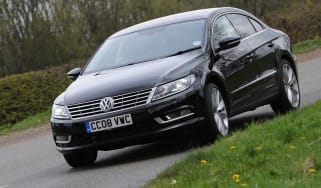 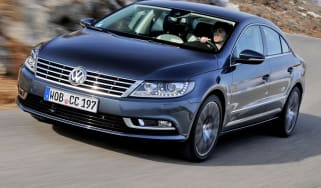 Volkswagen CC is no longer part of the Passat family, but is the stylish four-door as good as ever?
Skip to HeaderSkip to Content