Volkswagen CC is no longer part of the Passat family, but is the stylish four-door as good as ever? 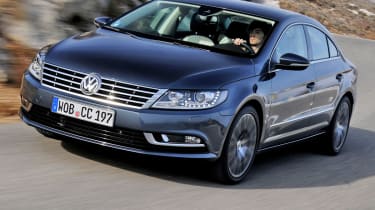 The CC does everything its predecessor did so well, but there have been key improvements where it matters. It has always been the most stylish Volkswagen in the range, and this update ensures it retains that honour. Meanwhile, the tweaks to the engine line-up, as well as its excellent refinement and long-list of standard equipment, will guarantee the CC's popularity in the fleet market. The handling is better than the Passat, but if Volkswagen want to really differentiate the CC from the standard saloon, there needs to be a bit more life to the steering.

Shortly after Volkswagen facelifted the Passat, it also refreshed the Passat CC. But with the changes came a different name-tag, so the car we’re driving here is simply known as the CC.
The curvy lights and rounded grille of the original car have made way for a more straight-edged look inspired by Volkswagen’s new family face. The grille is now bolder and LED daytime running lights come as standard.
Inside, the high quality cabin from the Passat is carried over but with a huge level of customization. Buyers can choose between 11 different seat materials, three dash colours and four separate trim inserts, ranging from walnut to brushed aluminium.

The standard equipment list is even more generous, with even basic CC trim models getting sat-nav, a DAB radio, Bluetooth, climate control, alloy wheels and xenon headlights. Upgrade to GT spec and you get full leather upholstery, adaptive dampers, cruise control, parking sensors and larger alloys.
The engine line-up is similar to the Passat range, so there’s a 1.8-litre turbo petrol engine with 138bhp, a 2.0-litre turbo with 207bhp and the 2.0-litre diesel is offered with 138bhp or 168bhp. We drove the lower-powered diesel, which is predicted to be the best seller.
It comes as standard with a six-speed manual, but our car was fitted with the six-speed DSG gearbox. Shifts are smooth and quick, and help to launch the CC from 0-62mph in 9.9  seconds – exactly the same time as the manual. The punchy diesel feels extremely capable on the road, and it’s unlikely buyers will feel the need to go for the more powerful 168bhp model.
The downside of speccing the six-speed DSG gearbox is its effect on fuel economy. With a manual, this model would return 60.1mpg and emissions of 125g/km. With the DSG these figures are 53.3mpg and 139g/km.
The way the CC drives is pretty much unchanged from the Passat CC, but that’s no bad thing. Acoustic windows, more underbody insulation and extra sound-deadening have all done their part to improve what was already excellent refinement, making the CC one of the quietest cars in this price bracket, especially at motorway speeds.
Our range-topping GT model comes with adaptive dampers as standard which, when set to Comfort, really transform the CC into a supple long-distance cruiser.  In Dynamic mode, the CC was far more at home on the twisty roads of our launch venue Col de Vence in the south of France, but a lack of driver involvement means it’s not quite perfect.
Buyers worried about the CC being an exercise in style over practicality needn’t worry, as the large 452-litre boot remains and – despite the low roofline – tall passengers can fit in the back seats. One-touch switches in the boot make folding the rear seats incredibly easy, and there’s also an optional system to open the boot by swiping your foot under the rear bumper.
The Passat CC is close to doing everything perfectly: it looks fantastic, it’s practical, comfortable and refined, but while it’s far more capable in corners than the Passat, it still lacks the driver involvement which would make it a truly outstanding car. For a sportier model like the CC it would be nice to see a little more focus on this area.
Share this on TwitterShare this on FacebookEmail