Top performance in the dry; just found wanting at the pumps 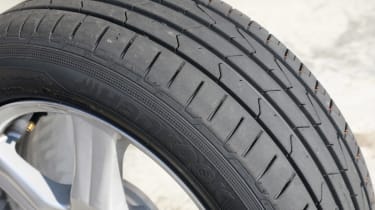 Top performance in the dry; just found wanting at the pumps

Better wet performance over the outgoing Prime2 was the target when Hankook introduced this tyre last year. At the launch we tested it against the Goodyear EfficientGrip and found precious little difference. And it proved the same here against the EfficientGrip Performance.

We couldn’t separate them across our wet tests, although the Prime3 had the tiniest edge in the dry, comfort and cost assessments. So it’s the one to buy for dry road performance.

It took the victory around the handling track alongside Continental and backed that up with a second in the braking test. At the wheel there was a sharpness to the Prime3 that rivals lacked. It required less lock than most, for a direct feel.

It did less well in the wet test with aquaplaning a weakness, particularly on the curve. The balance of the dry handling circuit was gone and the rear moved more than most. It lacked the bite it had on the dry track.

Wet cornering was better and it was in the middle of a tight pack in braking, around five metres behind the best. Interior noise was mid pack again, but fuel economy is not what we’d expect for a new design produced in this tyre labelling era.