The Aston Martin DB11 AMR is the first model from the brand's performance arm, and it replaces the standard V12 in the line-up 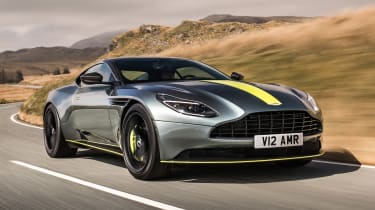 Aston Martin has revealed the DB11 AMR - the new flagship to the brand’s GT range. On sale now, priced from £174,995, the AMR replaces in the standard V12 DB11 in the line-up and gains subtle mechanical and styling improvements.

The 5.2-litre twin-turbo has been tweaked to produce 630bhp, a rise of 30bhp, however peak torque remains the same at 700Nm. The extra power - in addition to an improved shift calibration for the 8-speed automatic transmission - has knocked 0.2 seconds from the 0-62 time, which now takes 3.7 seconds, while the top speed has risen to 208mph (up 8mph). Fine tuning to the exhaust says Aston Martin, makes the AMR sound ‘slightly more vocal.’ 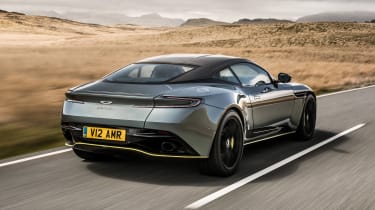 A revised suspension setup and a set of lightweight forged 20-inch wheels are claimed to give a sharper driving experience without harming ride comfort.

Those alloys are the most obvious of a range of subtle tweaks to the AMR’s styling. The roof and buttresses are finished in black, the tail lights are smoked, and there’s a mix of gloss black and exposed carbon fibre trim for the headlight surrounds, front grille and tailpipes. Racier options include an engine cover, exhaust tips, and a deployable spoiler also finished in carbon fibre.

Inside, the AMR features a lime-coloured stripe that runs through the centre of each of the seats and the roof lining. A carbon fibre steering wheel and paddle shifters have also been added.

Aston has also launched 100 limited editions versions of the AMR. Called the Signature Edition each features a green and lime exterior finish and carbon fibre detailing inside and out. The limited run model costs from £201,995.