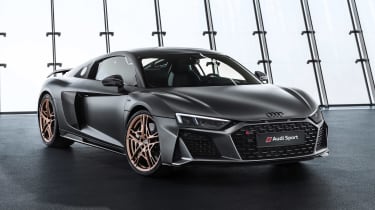 Audi has announced a limited-run R8 V10 Decennium edition, which celebrates the R8 V10’s tenth anniversary. Based on the forthcoming R8, the car’s production will be strictly limited to 222 units, of which only ten will make it to the UK. Available to order now, prices start from £171,700 with deliveries commencing in March.

The Audi R8 “Decennium” edition is powered by a version of the long-serving 5.2-litre naturally-aspirated V10, producing 611bhp and 580Nm of torque. As in the standard R8, power is sent through to a seven-speed automatic gearbox then to a Quattro all-wheel-drive system, with Audi claiming a 0–62mph sprint of 3.1 seconds and a top speed of 205mph.

Inside, the R8 “Decennium” gets a pair of diamond-quilted sport seats, an Alcantara steering wheel, copper-coloured stitching on the door cards and centre console, carbon fibre trim, a new gear selector, a digital instrument binnacle with integrated satellite navigation and a reversing camera.

Do you think the era of the V10 is coming to an end? Let us know in the comments below...