Shrove Tuesday has crêped up on us again, so as a tribute to the mighty pancake here are the lowest and flattest cars ever made 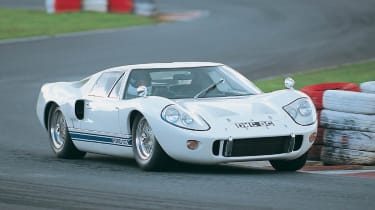 It's nearly time to pretend to give up something for Lent, but there's a very important event to come first - Pancake Day! Shrove Tuesday is always a high point on anyone's early February calendar and in honour of the only day of the year dedicated to a flat foodstuff, we've rounded-up the cars that best resemble pancakes and compiled this handy list of the flattest cars ever built.

The tallest car here stands just 43 inches off the ground - certainly low enough to escape the car-park charge by squeezing under the barrier. By comparison, cars like the 58-inch high Ford Fiesta supermini look like giants. There are cars of all types in our round-up - some of them even made it to production.

So without further ado, read on for the flattest cars ever made. Some are batter than others but we think every one of them is flipping cool.

To avoid confusion we've given the height of each car in inches and 'pancakes', working on the basis that the average pancake is 3mm tall...

Maybe the most famous car on this list, the GT40 shows-off its flatness proudly. The 40 in its name comes from the cars official height of 40 inches. Originally constructed to compete in the Le Mans 24-Hour race, it performed its role admirably, pulling in four consecutive wins on the Circuit de la Sarthe.

The MkIV GT40 remains the only American-designed-and-built car ever to win a Le Mans title, thanks in no small part to the colossal 7-litre V8 engine lurking beneath the car's slinky bodywork. Only 107 cars were built, and even less made it to customers - and though 2005 bought a production car inspired by the GT40, its height of 44 inches made it way too tall for this list! 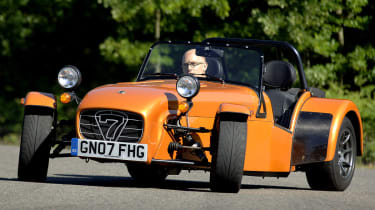 This one’s a bit of a cheat – while Caterham owners are accustomed to living without creature comforts, taking the windscreen off is a step too far for most. If they’re happy to do that, though, the height of the Caterham 7 drops to just 40 inches.

The 7 has a long history, beginning with the Lotus Seven way back in 1957. The car has a decidedly 'old-school' feel about it, from the separate headlights to the lack of weatherproofing, but it's got a strong following amongst enthusiasts. We're even running one as a long-term test. 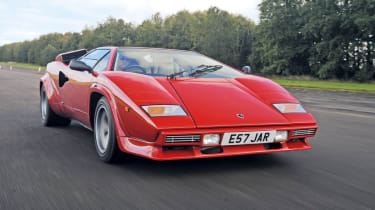 From stripped-back track supremacy, we now move on to one of the all-time great supercars – the Lamborghini Countach. At just 42.1 inches, it’s barely any taller than the GT40, and rivals the Ford's sense of occasion and sheer power.

The Countach was one of the first 'hypercars', where the focus wasn't on the car's on-road prowess but its crazy design. As a result the Countach was much better at turning heads than turning corners - though it would be a disservice to call the 350bhp V12-engined car 'slow'. The Countach was produced from 1974-1990, after which it was replaced by the much less crazy Diablo. 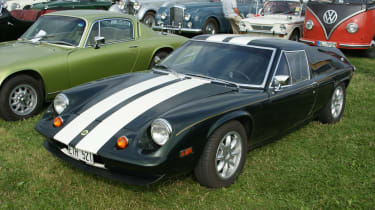 Colin Chapman’s philosophy of ‘simplify and add lightness’  was embodied in the Lotus Europa, which not only weighed from as little as 600kg, it was just 42 inches high. A mid-engined sports coupe, only around 9,000 were made. The Europa actually came around thanks to the Ford GT40 - Ford wanted a Le Mans racer, but the design Colin Chapman presented to the company was rejected.

This rejected design then became the Europa - the polar opposite to the GT40. Instead of a 7-litre V8, the Lotus used a 1.5-litre four-cylinder engine, but in a car that weighed so little, it still offered fantastic performance. 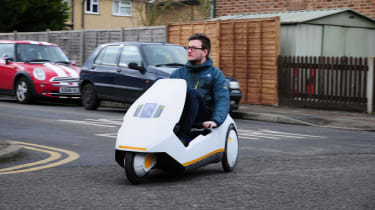 Can the Sinclair C5 really be called a car? We’re not entirely sure, but it’s definitely a British design icon and more importantly, is only 31.3 inches high. Who needs speed or safety when you can ride a gutter-hugging electric trike?

Sir Clive Sinclair believed fervently in a future where electric cars would be commonplace, and poured vast amounts of money into the C5 project. It's a pity then that the resulting tricycle design was spectacularly unsafe, and couldn't make it up hills without pedal assistance. The C5 was never popular, though it's fast becoming a collector's item. 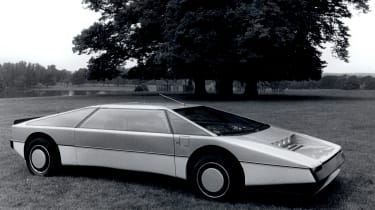 One of the coolest concept cars ever created, the Aston Martin Bulldog is the tallest car here – but it’s still towered over by nearly every production car, at just 43 inches high. It’s also blessed with one of the best headlight designs ever.

Despite its age (it was built in 1979), the performance on offer from the Bulldog would shame many a modern supercar. A 700bhp V8 engine endowed the car with a top speed of 191mph - not too shabby for a one-off concept! The Bulldog was originally intended to have a limited production run of about 25, but in the end only a single car was built. 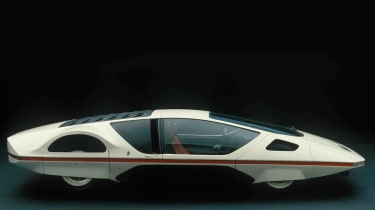 A striking design, the Modulo’s flatness meant it couldn’t fit proper doors. Entrance was instead made through a vast sliding canopy, and while the fully enclosed wheels would never have made production, they looked fantastic. All of this was enclosed in a shell only 36.8 inches tall. That’s definitely 'Modu-low'.

Unveiled at the 1970 Geneva Motor Show, the Modulo was never intended to make production - think of it more as a design study or a piece of art. That said, it was still fitted with a 550bhp Ferrari V12, so one could assume that performance was pretty brisk. 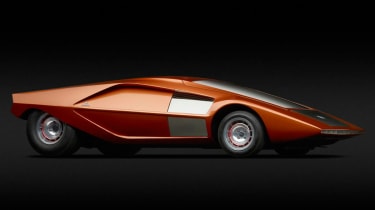 Another front-loading car, the Stratos Zero Concept was first seen at the Turin Motor Show in 1970. The pointed front end would have caused havoc with pedestrian safety, but the orange wedge-shaped body looked fantastically futuristic at just 33 inches high and the car even appeared in the 1988 film Moonwalker.

The Stratos Zero Concept predated the original Stratos by 12 months, and the Bertone-designed body hid a 1.6-litre V4 engine from the Lancia Fulvia. It pumped out a mighty 115bhp - but that didn't really matter, as the focus was on the cars razor-sharp looks. 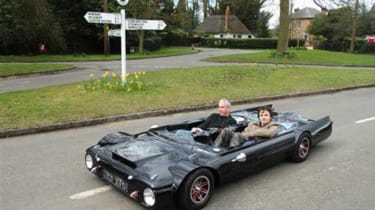 Custom car manufacturer Perry has held the record for the lowest street-legal car with three different vehicles since 1989. The current record holder, aptly named the Flatmobile, is just 19 inches tall, or just 161 pancakes. It’s not exactly the most comfortable car to drive, being based on a chopped up Hillman Imp, but it does pack a jet-turbine engine for quick getaways.

Perry’s other record holders, named Lowlife and Impressed, weren’t much taller – at just 24 and 26 inches tall respectively. They too are based on Hillman Imps - the rear-mounted four-cylinder engine from that car is a particularly good candidate for being squashed down, apparently. 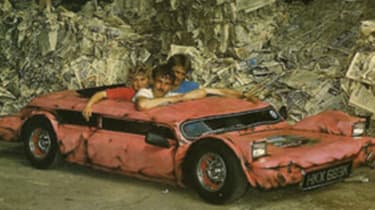 To put it another way, all three of Perry’s custom cars stacked on top of each other would amount to 69 inches high. That’s a stack three inches short of a single Range Rover that could easily be replicated with a stack of 584 pancakes.

Can you think of any flatter cars than the ones in our list? Let us know in the comments section below. Happy pancake day everyone...