This is the Rezvani Tank: a more extreme SUV 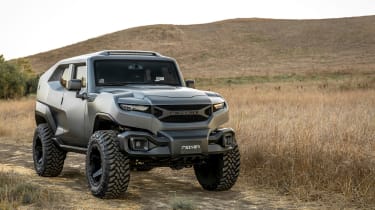 This is the Rezvani Tank - a no nonsense off-roader from California-based car company Rezvani Motors which usually specialises in modified supercars.

The extreme SUV has been priced from $178,000 in the US (roughly £134,000) but is unlikely to make it to UK shores. It comes powered by a 6.4-litre SRT V8 producing 500bhp and features an on-demand four-wheel drive system which can be tailored to suit specific needs on or off road. 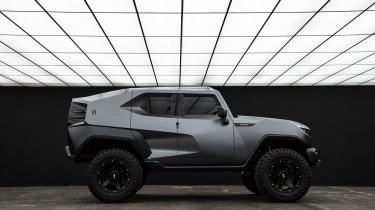 Although the bulky exterior is set to turn heads with its matte black paint scheme, the interior is less over-the-top. Specifically designed ergonomic seats have been developed for the Tank, which also features a head-up display.

Rezvani Motors was founded by Ferris Rezvani in 2014. The companies first creation was The Beast - a 500bhp open top supercar based on the Ariel Atom. An even more powerful 700bhp Beast X was then launched which the company claimed could hit 0-60mph in 2.5 seconds. That model costs from $270,000.

What do you think of the Revzani Tank? Let us know in the comments...