Rezvani Motors launches the Beast, a new lightweight high-performance roadster based on the Ariel Atom 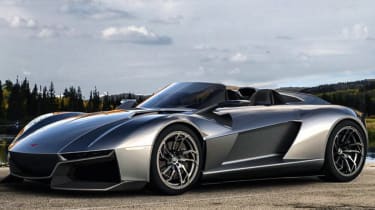 When Rezvani Motors first teased the Beast back in March, there were a few who questioned the project.

They needn’t have worried though – dubious name choice aside – as the Californian start-up has revealed its new high-performance roadster on time as promised, with the made-to-order Beast now on sale.

It’s based on the Ariel Atom, not that you’d know from looking. The sculpted, streamlined design we glimpsed earlier this year can now be seen in full, including those gaping trapezoidal hood vents, flared wheel arches and the exposed sloping dash.

According to Rezvani, the wide front end is intended to minimise friction, while the extending bodylines combine with angular rear panels to “provide maximum downforce at high speeds.”

Despite these changes, Rezvani has also worked hard on maintaining the Atom’s lightweight design. Thanks to carbon fibre bodywork, the entry-level Beast is only 667kg – 117kg heavier than the new Atom 3.5R – while the more powerful range-topping model weighs in at 703kg.

Under the surface, the open-top supercar has even more in common with the Atom, including the same rear-wheel drive layout and six-speed manual transmission.