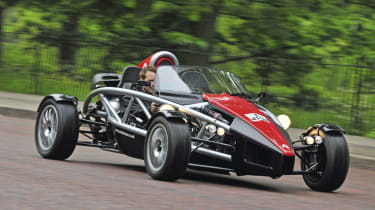 The addition of a windscreen is one small step for Ariel’s engineers, but one giant leap for its customers! It removes the need to wear a helmet for even short trips, and can be easily detached for trackdays for the full experience. What’s more, it can be retro-fitted to any Atom for £947. Otherwise, the Ariel is as sensational as ever – even in naturally aspirated form, it delivers crushing performance and nimble handling closer to a superbike than any other road car.

It's an Atom that’s guaranteed to split opinion! In the quest for added usability, the skeletal track car has gained a windscreen for the first time, so now there’s no need to wear shatterproof goggles or a crash helmet every time you pop to the shops!

Want to drive your car on a racing circuit? Undo three bolts and the windscreen lifts off, along with the wiper motor and washer bottle, all in one movement.

Sitting low in the thin plastic seats, buffeting is reduced around the driver’s head, but the lack of bodywork means it’s as draughty as ever once the pace quickens. The surprise is that despite its aftermarket conception, the screen has been integrated seamlessly into the styling.

In fact, the overall build quality is a notch above a Caterham. Simon Saunders, founder of the firm, is a former employee of Aston Martin, and it shows in the attention to detail. Touches like the tachometer needle glowing red as you approach the limiter, and the uncluttered footwell and dash, are an unexpected surprise.

We drove the naturally aspirated Atom 3, which lacks the pace of the 300bhp supercharged version, but 245bhp and a 600kg kerbweight is still a recipe for incredible acceleration. Hearing the intake next to your head suck in fresh air before the exausts spit it out is a thrilling soundtrack – and thanks to its VTEC engineborrowed from the latest Honda Civic Type R, the fun doesn’t stop until 9,000rpm.