Ariel's massive new engine makes the lightweight Atom an even faster, crazier drive than ever before. 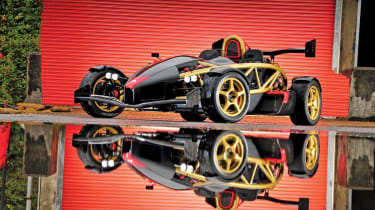 At more than three times-plus the price of a 300bhp Atom Supercharged – one of the fastest cars on the road – the Atom V8 seems pointless. But one full throttle burst and it makes you reassess how fast road cars could be. The torquey engine, sitting behind the driver’s head, is even flexible and easy to use at low speeds – although we would not recommend this model as a daily driver. Still, it’s the most thrills you can have on four wheels.

The world’s most extreme road car has just got even more insane! With its 300bhp supercharged 2.0-litre VTEC engine, the current Ariel Atom is no slouch – but that hasn’t stopped the small-scale British company from adding an extra four cylinders and 175bhp to its bare-bones sports car. We strapped ourselves in for a rollercoaster ride.
To give you an idea of how mad squeezing a bespoke 475bhp 3.0-litre V8 into a car weighing 550kg is, consider the power-to-weight ratio. With 864bhp per tonne, the eight-cylinder Atom has more than a typical superbike, nearly twice that of a Bugatti Veyron and roughly the same as a single-seater GP2 car.

The clutch is required to engage first gear on the pneumatic six-speed gearbox and get the model away from a standstill. But from then on, as long as at least 2,500rpm is dialled in, all shifts can be achieved with a simple tug of the carbon fibre paddles. The changes themselves hit home with a thump but are lightning quick, taking between 40 and 50 milliseconds to engage.
With so much power, you would expect the Atom to be difficult to drive – but even at town speeds, the torquey V8 is surprisingly flexible and docile. And despite narrow tyres, traction is superb compared to the current crop of supercars. In the dry we were confident enough to turn off the control system altogether.
Flex your right ankle, though, and all hell breaks loose. The response is incomparable to anything else on the road, and once the V8 hits its stride, the acceleration is too much for your brain to compute. A new five-point harness keeps you locked into your seat.
From here, the race-ready ceramic-coated exhaust produces a deafening shriek as the engine approaches the 11,000rpm red line and transmits vibrations to the base of your spine. The car has been designed mainly for the track, which is why it can be fine-tuned to your personal driving style.
Its racing pushrod suspension uses three-way adjustable dampers and four-setting adjustable springs, plus you can tweak the angle on the front and rear carbon fibre spoilers for more or less downforce.
Only 25 examples of the Atom V8 will ever be made, with intrepid owners taking delivery in early 2011. If you fancy one, you’d better be quick – only two of the run are left. The Atom V8’s huge price tag might make it an irrelevance, but we doubt we will see anything like it again.
Rival: Caterham Levante
With a 500bhp supercharged 2.4-litre V8, this tie-in between Caterham and tuning expert RS Performance is the only car offering a similar experience to the Atom V8. Each one costs £115,000 and is built to order.
Share this on TwitterShare this on FacebookEmail