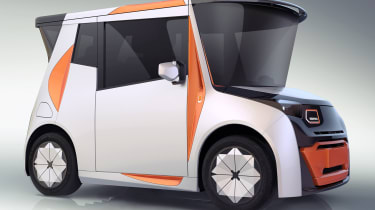 Ex-BMW design chief Chris Bangle has unveiled a quirky and unusual type of electric vehicle at the Los Angeles Motor Show, in which the driver can utilise the car as an office space or living quarters.

It’s called REDS (Revolutionary Electric Dream Space) and it has been designed to accommodate drivers with a relaxing home environment during stressful traffic jam conditions. It can seat four adults on the move, with space for another when the car is parked.

In order to achieve a homely feel, the driver’s seat can rotate 180 degrees. The driver’s armrest folds out and the steering wheel can be packed away, too. When stopped, the REDS EV can be configured into a working space with an integrated drop down table and a 17-inch screen that can be used for presentations. The tailgate doubles as a bench, while the high roofline ensure there’s plenty of headroom. 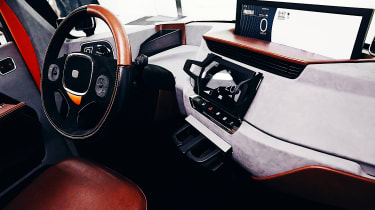 Despite leaving BMW in 2009, Bangle’s latest design has certain similarities with the German firm’s own i3 EV. The front nose and boxy shape of the compact REDS EV give it a similar look, though polarising features like the curved windscreen and tall roofline give it a very different design overall.

The body is made of aluminium, and it houses the largest solar panel roof in its category. It uses a rear-driven motor and according to Bangle can reach 75mph – the maximum speed on China’s highways.

A team fronted by Bangle for the China Hi-Tech Group Corporation (CHTC) developed the striking city car with the Chinese megacity market in mind. CHTC created the company Redspace to market the REDS EV.

Redspace is responsible for the testing and development of Bangle’s latest innovation as well as the finalisation of production plans. If all goes to plan, we could see a working version on sale in China before the end of the decade.

Do you like the idea of being able to work on the go in the REDS EV? Let us know in the comments below…