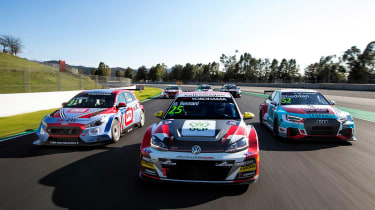 The WTCC is dead – long live the WTCR! The top echelon of global touring-car racing has undergone a transformation over the winter months, with the powerful, sophisticated, but increasingly expensive TC1 cars being parked in favour of the more affordable and more closely production-based TCR formula.

A capacity 26-car grid is the result, with teams representing Audi, Honda, Hyundai, Peugeot, VW and SEAT’s newly independent performance brand Cupra all on board. Some big names from the WTCC days have stuck around, too, including 2017 champion Thed Bjork.

Two familiar British drivers will also be in the thick of the action when the series’ first round gets under way in Marrakech, Morocco, this weekend: Rob Huff, the 2012 WTCC champion for Chevrolet, and Gordon Shedden, who’s made the move away from UK racing to drive an Audi after clinching three British Touring Car Championship titles with Honda.

So what was it about Audi and TCR that tempted Scot Shedden away from a likely ‘job for life’ with Honda in the UK? 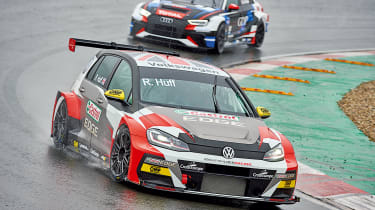 “It was always about getting the right offer,” he told Auto Express during WTCR testing at Barcelona last week. “In the TC1 era, if you weren’t in a works Citroen, you weren’t going to win anything; there was a very limited possibility of competing on a level playing field.

“I actually wasn’t looking to leave the BTCC this year, but the timing for a WTCR move was perfect, because the cars are new to anyone who was in WTCC and the circuits are new to anyone who’s raced in TCR before. And when Audi comes calling and it’s intent on doing something proper, it’s difficult to turn down.”

Although the TCR cars are about 40bhp down on a BTCC car and have less scope for set-up adjustment, Shedden said he was “pleasantly surprised” by the Audi RS 3 LMS he’s driving for the Belgian WRT team.

“As a global touring-car platform, it’s a no-brainer,” he explained. “It’s technical enough that you can still have an input, while still being realistic enough that the series isn’t going to become a spending war.”

Huff, who’s campaigning a Volkswagen Golf for Sebastien Loeb Racing, added: “Apart from outright speed, the most important thing is the closeness and ferocity of the racing.

“You see in any motorsport formula, when you reduce aero dependency, the racing becomes interesting, because the cars can follow each other closely.

The 2012 world champ is eager to take on the field in Marrakech and feels WTCR should hit the ground running. “We have young drivers coming from Formula 2 and national TCR championships, plus stalwarts like myself, Coronel, Muller, Tarquini and Giovanardi,” he said.

“All the elements are in place for a classic year. It could be one of the best seasons of touring-car racing ever.”

Who do you think will win this year's WTCR? Let us know in the comments section below...