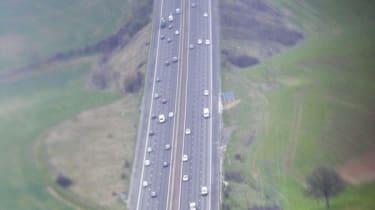 The M62 links Liverpool to Hull, traversing the Pennines along the way. As a result of this, it is the highest motorway in England, with Windy Hill near junction 23 measuring in at 1,221. The M62 shares seven miles with the M60 orbital near Manchester and also has an average daily traffic flow of around 144,000 vehicles in Yorkshire alone.

There are numerous sections prone to traffic problems and gridlock, particularly the Leeds and Huddersfield M60 section. While the M62 does without junctions 1, 2, 3 and 4 because the road was originally supposed to start in the centre of Liverpool, but ended up starting on the outskirts if the city.

• How to use the hard shoulder

Even if you steer clear of the normal traffic hot spots, as with any other motorway, it is subject to delays and traffic jams caused by roadworks and accidents. The advice remains the same as with any journey and it’s to always check the weather and traffic conditions before heading out, as knowledge of traffic problems on your route could dramatically cut your journey time.

Below we have included all the information you’ll need to check the current traffic conditions ion the M62 with the latest traffic news in a live feed and a real-time traffic map showing any incidents or congestion problems.

Scroll down to find live tweets from the Highways Agency, official police accounts and other traffic news feeds.

There’s a strong chance that you’ll encounter some traffic issues when driving the M62 so just in case there is any disruption you can keep up to date on delays with our live and continuously updated M62 traffic map.

The map below shows live updates on the current disrupted areas of the M62 for roadworks, accidents or general congestion causing delays on the route…

Details of the latest weather warnings in the M62 area from the Met Office...

The history of the M62

The first part of the M62 to be built was the Stretford–Eccles Bypass, of which only 1 mile still exists as the rest is now the section between Junctions 7 to 13 of the M60. Construction started in 1957, and that part of the motorway opened in 1960.

Surveying for the Pennine section began in November 1961 and its route was decided on in July 1963. Construction between Windy Hill and Pole Moor was difficult due to hilly terrain, peat bogs, and harsh weather conditions.

The Lofthouse Interchange was the next section to be completed building took place between 1965 and 1967. Two contracts were agreed for the section between Lofthouse and Ferrybridge in 1972, and both were completed by 1974. Finally, during the construction of Ouse bridge engineers encountered many problems, which delayed the completion until May 1976.

All of the M62 junctions on the southbound and northbound carriageways are detailed below...

Planning an even longer journey? Then take a look at our live M6 traffic news page.