Lancia Delta Integrale reborn at the hands of Automobili Amos 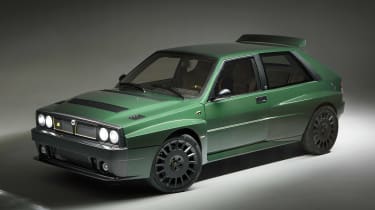 Eugenio Amos, founder of Italian coachbuilder Automobili Amos, has created what he claims is the ultimate tribute to the Lancia Delta, the Futurista. A complete reworking of the original 1980s hot hatch complete with extensive use of carbon fibre and engineering upgrades, the car will be available from €300,000 (£270,000).

We’ll start with the bodywork. First, the rear doors have been welded shut, which makes the Futurista look like the old Delta S4 homologation special. Also, every unbolt-able panel has been scrapped and replaced with a carbon fibre duplicate, which results in a weight saving of around 90kg over the original car. Which is good, particularly because carbon fibre won’t rust in the way that the Lancia Delta’s original panels have been known to.

The engine’s also been given a thorough seeing-to, with the addition of an uprated intercooler, new intake system, improved exhaust and, thankfully, a new engine loom which will hopefully also eradicate the trademark Lancia wiring gremlins. This results in a claimed power output of about 330bhp, which should be more than substantial enough to worry the current crop of super hatches. 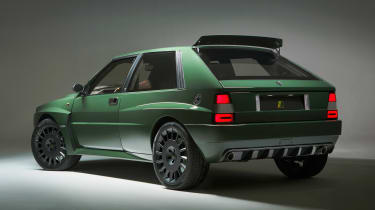 The Delta Futurista’s suspension, brakes and transmission have all been beefed up, whilst the interior is garnished with sumptuous Alcantara Recaro seats, lashings of carbon fibre and a big red button with a rocket ship on it. The function of which, we’re very keen to discover.

And the price for all this craftsmanship? Well, much like the Eagle Speedster and Singer 911, it’s considerable at £270,000. But Eugenio Amos says, the feelings of “passion, euphoria and nostalgia” attached to this car can’t be measured numerically. It’s bought with the heart rather than the head.

Let us know what you think of the £270,000 Automobili Amos Delta Futurista in the comments section below...