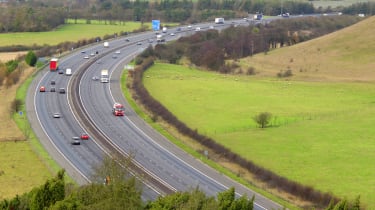 The M40 is a vital link between the Midlands, Oxford and London. It is an alternative to the busy M1 motorway the A1. Any road that links directly to the capital is vastly important in terms and business and economic value as well as population movement and the M40 links London to the UK’s second city Birmingham.

Like most other UK motorways, the M40 falls victim to the rush hour commute traffic jams but unusually it has relatively little traffic or holdups meaning a smoother journey for drivers. Roadworks and accidents can cause traffic jams and delays so its always best to be prepared if you are travelling on any part of the M40. On this page we’re bringing you the latest live M40 traffic news to help you dodge any M40 delays, with travel alerts, live updates and an incident map for both northbound and southbound lanes.

Scroll down to find real-time alerts from the M40 via our specially built Twitter feed, which collates vital updates as they happen from the Highways Agency, official police accounts and other traffic news feeds. We’ve also got a live map showing exactly where the delays are, plus a useful list of all the motorway’s junctions...

About the M40 Motorway

The M40 was recently voted motorists’ second favourite motorway in the UK due to its reasonably light traffic, few to no roadworks and plenty of petrol/service stations.

• What are smart Motorways

If you want to try a bit of car spotting then the M40 is a good place to start. JLR, Aston Martin and Mini all have plants a stone throw away from the M40 with JLR and Aston being located in Gaydon while Mini has its factory in Oxford. Also, the British Motor museum can be found along the M40 too.

Traffic jams can crop up at any time on the M40 motorway caused by accidents, weather conditions, roadworks or volume of traffic, but fortunately you can keep one step ahead of the delays with our live and continuously updated M40 traffic map.

The map below shows live updates on the current problem areas of the M40 for roadworks, accidents or general congestion causing delays on the road...

Details of the latest weather warnings in the M40 area from the Met Office...

The History of the M40 Motorway

The first stretch of the M40 was constructed between 1967 and 1974 and connected London to Oxford before an extension to Birmingham was finished in 1989.  At 89 miles long it may not be as long as most other motorways in Britain but it provides a vital link between London and the Midlands and offers an alternate route to the M1.

The building of the M40 was not without difficulty though as a plan to build through Otmoor, an area of wetland known for its wildlife, was highly criticised by the public. In response to the plans, Friends of the Erath purchased a plot of land on the moor that forced the M40 route to be redirected to avoid Otmoor completely.

Originally no services were built on the M40 with just a single parking area complete with some temporary toilets for motorists to us. However these were quickly removed and the first service station, now Cherwell Services, was built in its place.

There are now four service stations on the M40. The Beaconsfield Services was the first motorway services in the UK to introduce a Wetherspoon bar and restaurant, a decision, which proved highly controversial.

All of the M40 junctions on the southbound and northbound carriageways are detailed below...

Planning on heading to the North West or the Midlands? Then check out our M6 Updates page too…