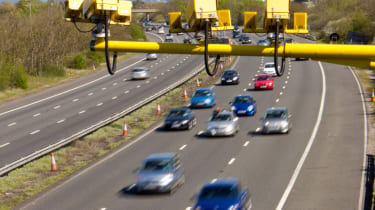 The first eight cameras in the top 10 ranking were in Avon and Somerset Police’s area of jurisdiction, with the last two belonging to Bedfordshire Police. Full details can be seen in the table below.

The data, which came from an investigation by GoCompare, also revealed the overall number of speeding offences captured by the top 10 most active cameras has declined from 115,814 in 2016 to 105,983 in 2017. This suggests the October 2017 increase of the maximum speeding penalty to a life sentence for fatal incidents may be working.

However, the 22,350 offences recorded by Avon and Somerset’s M32 camera in 2018 was the highest result from all three of the years analysed, despite that period only applying to the first five months of the year as opposed to all 12.

Avon and Somerset Police also led the table as the Police force with the most active cameras in 2016, 2017 and the first five months of 2018. Last year, the force recorded 19,088 offences with its camera at the M5 junction 16-17 southbound, while the year before saw 21,009 offences spotted by the M4 J19-20 westbound camera.

GoCompare obtained the figures by sending Freedom of Information requests to the UK's 45 police forces. The insurance comparison site received 24 replies, of which only 16 were able to give a full breakdown of the results.

Superintendent Andy Williams of Avon and Somerset Police commented: “Speeding can have fatal consequences. It endangers the lives of other road users. We don’t want to catch people speeding – we want people to obey the speed limits. I hope this statistic acts as a warning to others that all speed limits are being proactively enforced and makes them slow down.”

Are any of the most active speed cameras near you? Let us know in the comments...