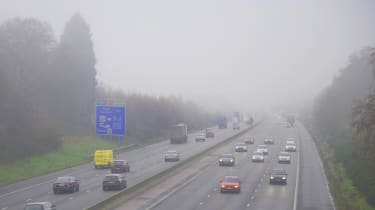 The M3 connects London to Southampton and passes several major towns such as Basingstoke, Farnborough and Winchester. At 59 miles long, the M3 is a vital link between the south coast and the captial in terms of both business and motorists and is one of five major roads that lead into the south of London.

While the M3 suffers traffic jams much like every other motorway in the UK, the M3 gets particularly bad around holiday periods due to its connection to popular tourist destinations such as the Isle of Wight, Portsmouth and the New Forest National Park. This, on top of the usual roadworks and accidents, can mean that traffic delays are highly likely when travelling along the M3.  But we want to help you avoid any M3 problems by bringing you the latest live M3 traffic news to plan your journey with travel alerts, live updates and an incident map for both northwest and southeast carriageways.

Scroll down to find real-time alerts from the M3 via our specially built Twitter feed, which collates vital updates as they happen from the Highways Agency, official police accounts and other traffic news feeds. We’ve also got a live map showing exactly where the delays are, plus a useful list of all the motorway’s junctions...

The M3 begins in Southwest London, just south of Twickenham, when the A316 becomes the M3 at its first junction in Sunbury. It then exits the capital and travels through Surrey and Hampshire towards Southampton when it connects with the M27.

As with any British motorway, the M3 contains speed cameras along its route including average speed cameras in operation along the SMART motorway section. However when compared to many other motorways, there are fewer speed cameras on the M3. It's left to police patrols to keep motorists in check.

The question of safety has been raised multiple times regarding the M3. In September 2017 alone there were four serious/fatal accidents and the safety of the motorway has even the subject of a debate in Parliament in the past.

History of the M3

The M3 was originally approved as the ‘London to Basingstoke Motorway’ and was built to relieve two single carriageways that had become constantly congested.  Sections of the exsiting A33 were widened in 1967 to become dual carriageways but this only marginally solved the congestion issue leading to the M3’s approval.

The eastern section of the M3 was opened in sections with the first Hampshire section being opened in 1971 with the Surrey section following in 1974. The cost for this first pahse of building was £46million

The public inquiry for the "M3 London to Basingstoke Motorway: Popham to Compton extension” looked at this section of the M3 extension passing Winchester, alongside water meadows at St Catherine’s Hill. This decision was widely objected and even caused many to be ejected from the inquiry for causing a disturbance. The M3 extension was reduced in order to defer the decision regarding the controversial Winchester pass.

The decision to extend the M3 southbound toward the coast was met by protests from environmental campaigners, who opposed this route of the M3 due to the need of cutting through large areas of the wooded Twyford Down.

The last section of the M3 opened in 1991 and was Junction 12 to Junction 14. This section replaced part of the A33 road which was widened and upgraded to motorway standard. It also housed the connecting junction between the M3 and the M27.

Heading through Essex and Cambrigeshire? Then check out our M11 traffic updates page too…