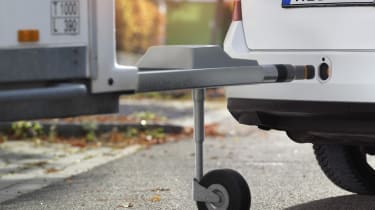 A new tow-bar concept could potentially revolutionise the way caravans and trailers are attached to cars, updating a system that has remained largely unchanged for over 80 years.

The Automatic Trailer Connection system uses sensors and cameras to detect when a car is two metres away from a caravan or trailer. At that point, the driver need only press an “auto attach” icon on their infotainment display, and the car will reverse to the trailer and hitch itself up. No cables require attaching – these are connected inside the bumper – and the concept can be operated without the driver having to get out of their vehicle.

The concept, from Swedish technology company Semcom, does require some modification of the tow car. Instead of a conventional bar, a socket in the rear bumper receives the trailer hitch, which itself is different from the traditional setup, which dates back to 1932.

Sofie Askenbom from Semcom said the concept “is based on the smart systems that cars are already equipped with nowadays”, adding: “Given the vast amount of money that’s been spent on product development in the automotive industry over the past 80 years, it’s strange that nobody has done anything about towbars when so many people find it to be a complicated solution.”

Askenbom admitted the Automatic Trailer Connection system was “mainly devised to demonstrate what new perspectives can bring”, but said she hoped “car and trailer manufacturers may be interested in taking it further in future”.

There are an estimated 920,000 caravans in the UK, according to the National Caravan Council, while Ifor Williams, Britain’s best-known trailer manufacturer, has sold over half a million trailers since 1958.

Do you think this concept will make hitching trailers and caravans easier? Let us know in the comments below...