Last year saw the lowest number of uninsured drivers caught on the road since 2012, even though 2017, by contrast, saw the most 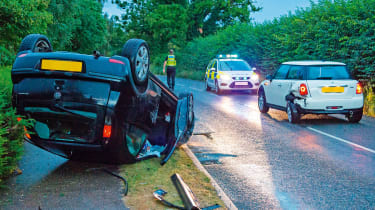 Fewer drivers were caught behind the wheel without insurance in 2018 than in any year since 2012, new figures have revealed.

Police apprehended 79,713 uninsured motorists last year – the lowest number in the last seven years – compared with 118,698 in 2017, which was the highest number since 2012, according to a Freedom of Information request made to the DVLA (Driver and Vehicle Licensing Agency) by the RAC.

• Cheapest cars to insure in the UK

The figure for 2018 represents a 33 per cent drop from 2017’s high, or a 27 per cent decrease from 2012, when 108,616 people were caught driving without insurance, the penalty for which is six to eight penalty points being placed on the offender’s licence for four years.

The youngest offender in 2018 was 11 years-old, but the youngest recorded since records began in 2012 was a 10-year old who was caught in 2016. In contrast, the oldest offender on record is a 96-year-old found behind the wheel without insurance last year.

In 2011 the Department for Transport – along with the DVLA and the Motor Insurers Bureau – introduced Continuous Insurance Enforcement, which sees uninsured drivers receive warning letters and Fixed Penalty Notices if they fail to take out insurance.

RAC Insurance director Mark Godfrey believes this policy contributed to the overall decrease in uninsured drivers from 2012 to 2018, while attributing the increases in 2016 and 2017 to the rising cost of insurance premiums.

What do you think are the reasons behind the fall in uninsured drivers caught in the UK? Let us know in the comments...