Beware of the hedgehog: new road signs to warn of small animals on road 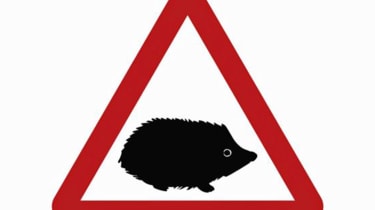 Hedgehogs are the latest animal to join the UK’s road-sign landscape, after the Department for Transport (DfT) unveiled new warning signs intended to alert drivers of the potential for small animals to be on the road.

The hedgehog signs, while distinctive, are not intended to warn drivers just of our prickly friends, but are also designed to signify the possible presence of all types of small wild mammals, such as squirrels, otters and badgers. The hedgehogs join deer, cows, sheep, horses, toads and ducks in the UK’s road-sign menagerie. Hedgehogs have been singled out for special treatment partly because their numbers have halved in the last two decades, and now stand at just a million or so animals.

• Pointless and confusing road signs to be removed

As well as protecting wildlife, however, the signs are intended to keep road users safe. In 2017 alone, the DfT says 629 people were injured and four killed in accidents involving animals other than horses. And the Transport Secretary, Chris Grayling, said the signs would not only “help to reduce the number of people killed and injured”, but would also help “our precious small wild mammal population to flourish.” Grayling called on local authorities to identify wildlife and accident hotspots where the signs should be situated.

Motorcyclists can be particularly vulnerable to collisions with small animals and Tony Campbell, chief executive of the Motorcycle Industry Association, said his organisation was “pleased to welcome these new signs that will help everyone, including those on 2 wheels or 4 legs, complete their journeys more safely.”

• Do you really know your road signs?

But while the UK’s road signs may be being updated to reflect our smaller wildlife population, driving laws still only require motorists to report hitting dogs, horses, cattle, pigs, goats, sheep, donkeys and mules. No action must be taken if a driver runs over a cat, or other smaller animal, and performing an emergency stop for a small animal may not be considered reasonable if the action results in an accident with other road users.

What do you think of the new road signs? Let us know your thoughts below...