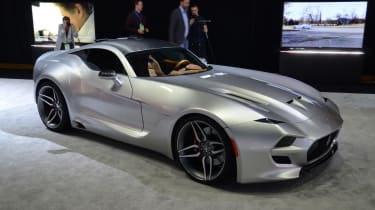 Alongside the Destino saloon, VLF Automotive has debuted its striking Force 1 V10 at the 2016 Detroit Motor Show. Limited to just 50 units a year, the supercar gets a 745bhp 8.4-litre V10 from the Dodge Viper.

VLF Automotive is a new company formed with Henrik Fisker (who built the ill-fated Karma and is credited with designing the Aston Martin DB9), former GM boss Bob Lutz and racing driver Ben Keating. With those names behind it, it could be a Force to be reckoned with. 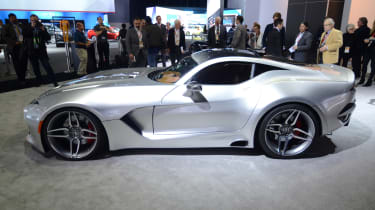 The styling won't be to everyone's tastes, with a mass of slits and grilles at the front giving the car a distinctive face. The rear end reveals its Dodge Viper connections, with the same cab-rearward layout and super-wide rear tyres.

It even gets the same side-exit exhausts as the Dodge, but VLF insists it's more sophisticated under the skin. The computer-controlled active suspension is straight from Keating's racing Vipers, while the tan leather-lined cabin even gets a champagne bottle holder between the seats. 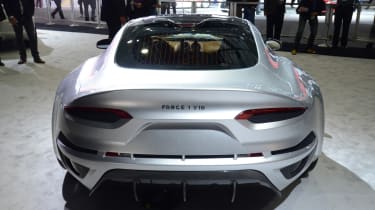 It's not all talk, however, as VLF promises a hypercar-worrying top speed of 218mph and a 0-60mph time of three seconds flat. That naturally-aspirated V10 feeds the rear wheels through a six-speed manual gearbox, with a six-speed automatic optional.

Considering that performance, its starting price of $268,000 almost seems like a bargain. Production begins in April 2016, but expect those 50 units to sell out fairly quickly.

Read more about the highlights at the 2016 Detroit Motor Show here...