Driverless trucks to be tested on UK roads 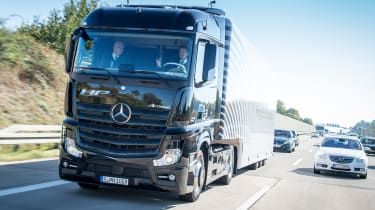 Driverless trucks are to be trialled on major British roads from next year as part of a £8.1million project to reduce business costs and cut pollution, the Government has said.

Up to three lorries will travel in a convoy led by a lead vehicle that controls steering, braking, and acceleration. The trucks will be linked through connected technology and automated driving systems but will feature drivers in each cabin to take over control. 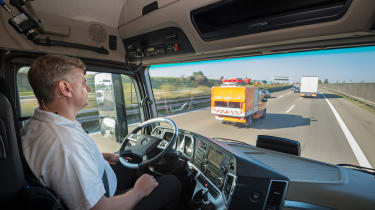 The lead truck will be driven by a human driver and will control the pace and direction of the convoy. The trucks following the lead driver will automatically mimic the movements, maintaining a given distance to the lead truck. This is said to improve fuel economy and reduce emissions as the lead truck pushes air out of the way, making vehicles in the convoy more efficient.

The trials will be carried out in three phases. Initial testing will be done on closed test tracks to determine the correct distance trucks in the convoy must maintain, with road trials expected to arrive by the end of 2018.

The Department for Transport said similar trials have already been carried out elsewhere in Europe and in the United States. Transport Minister Paul Maynard said: “Advances such as lorry platooning could benefit businesses through cheaper fuel bills and other road users thanks to lower emissions and less congestion.”

However, the trials have raised road safety concerns. Edmund King, president of the AA pointed out that the large convoys could block road signs and junctions for some drivers.

How would you feel driving next to a convoy of autonomous trucks? Tell us in the comments below...