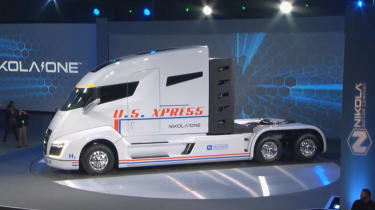 The Nikola One – a hydrogen fuel cell truck its makers believe will revolutionise the trucking industry with eye-catching range and power – has been revealed at a special launch event in Utah.

It uses a fuel cell producing 200kW energy for the 320kWh battery pack, and Nikola claims it has 1,000bhp and 2,711Nm of torque. The large hydrogen tanks mean a claimed range of 800 – 1,200 miles depending on specification, and should the fuel cell fail it can travel over 100 miles on the batteries alone. Regenerative braking and the truck's reliatively light weight means it has almost double the stopping power of a regular semi truck. 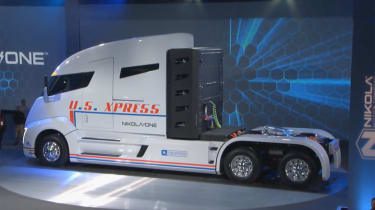 With the 1,200 mile range, the One comes with fuel economy equivalent to around 15mpg – easily more than the 5-7mpg achieved by most trucks in America.

As a company, Nikola motors plans to be 100 per cent emissions free in North America. The hydrogen powering the trucks will be generated via a nationwide network of zero emission solar farms, which the company says be built from January 2018 onwards. These will feed a network of over 56 initial hydrogen stations by 2020, with plans for 364 in the future, ensuring the Nikola trucks can get anywhere they need to across the US. 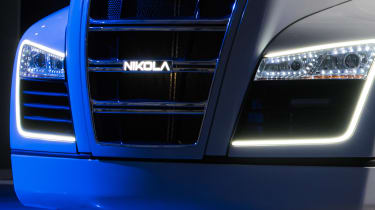 The unique powertrain means that the Nikola One benefits from a much lower centre of gravity than a regular truck, as well as a more spacious cab with greater visibility. Inside, there’s clearly been inspiration from Tesla, as the One has a huge, 15-inch portrait-style touchscreen to control most of its features. Sleeper amenities will include one or teo full size beds, 4K televisions, on-board 4G Wi-Fi plus a full size fridge and freezer.

• Driverless lorries to be tested on UK roads

Leasing deals should range between $5,000 - $7,000 over 72 months or 1,000,000 miles - whichever comes first - and over that period customers will get free hydrogen and electricity from Nikola fuelling sites. At the end of the leasing period, customers will get a replacement truck too.

Nikola currently has no real manufacturing muscle, so the first 5,000 trucks will be built in partnership with Fitzgerald. The company has announced plans for a $1 billion manufacturing plant in the future though, and we're promised more on this next year.

A cheaper model is also in the pipeline - the Nikola Two will be a day cab version, with fewer amineties and no sleeper parts. 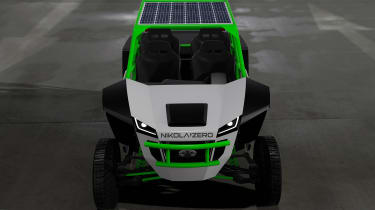 Nikola’s other offering is much less practical, but could be great fun. The Nikola Zero is a 520hp electric 4x4 created for pure hooliganism on an off-road course.

With a range of up to 300 miles with the new 107kWh battery pack, there’s plenty of fun to be had, and a 3-second 0-60 time combined with monstrous tyres and huge ground clearance should guarantee you won’t get stuck anywhere. You can reserve a Nikola Zero for $750.

Would you place your faith in a hybrid lorry? Let us know in the comments below...