Making a motorhome: behind the scenes with Auto-Trail

Motorhome sales are booming, but few manufacturers sell them off the peg. We visit a specialist to see what's involved in the conversion 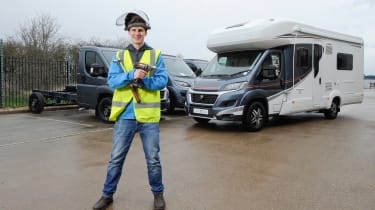 It's 3pm - time for a cup of tea. In an ordinary Fiat, you'd pull over at the next motorway services and buy an overpriced cuppa from a disgruntled teenager, gulping it down while listening to the noise of vehicles passing by.

Luckily, we're in no ordinary Fiat, and in fact, we could pull over by a much nicer view, brew our own tea, break out the snacks and flip on the TV to catch the afternoon football. That's the joy of the humble motorhome.

These vehicles don't receive much love on our roads, but climb aboard one and you're greeted by a plush interior, handcrafted furniture, beds, a kitchen, a television and even a shower. Yet most car manufacturers don't build motorhomes, which begs the question, where do the 200,000 registered campers in the UK come from? 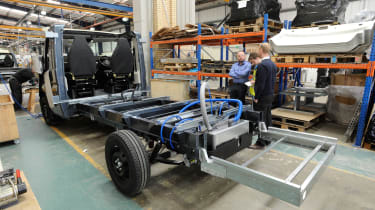 Auto Express visited Auto-Trail in the industrial town of Grimsby, Lincs, to get our hands dirty and find out more.

Auto-Trail has been building motorhomes for over 30 years, and is the UK's biggest manufacturer of them. Enter its factory and you're met with a trophy cabinet filled with awards of all shapes and sizes, with 'Motorhome of the Year' engraved on most. The awards underline years of success, something the company still enjoys today.

It's a long journey to go from standard van to award-winning motoring. The build process starts and ends with Fiat. The Italian manufacturer delivers a fresh fleet of stripped Ducatos to Auto-Trail - the rear body has been removed and only the cockpit with the engine, transmission and drivetrain remains. previously, Auto-Trail used Ford and Mercedes vans to build their motorhomes on, but according to Hensman, Fiat currently makes the best vans for the job. 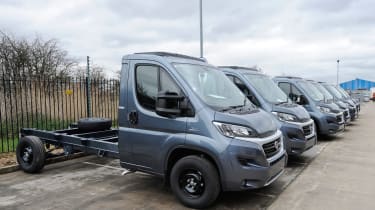 'Back in the day, we had to do a lot of prep ourselves, but Fiat is great,' he says. 'It supplies the vans with beefed-up suspension, and a chassis ready for our extension work.'

Fiat has also developed a trio of four-cylinder diesel engines specifically for these motorhomes - two 2.3-litre variants and a 3.0-litre unit, with the latter giving 180bhp and a healthy 400Nm of torque.

With these adapted Ducatos on site, water and waste tanks are fastened directly to the chassis, while more premium models also see chassis extensions bolted on.

There's a whiff of sawdust in the air that can't be ignored. A peculiar occurrence in a vehicle factory, but an important part of Auto-Trail, as it builds its own furniture and shelves for its motorhomes, as well as the floor. That all happens in the wood shop, where a tower of shelves, beds and panels rests ready for inspection. 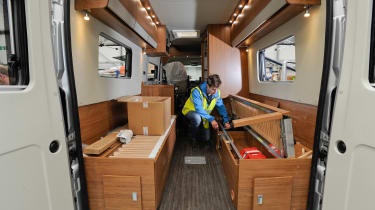 Items like sinks, worktops and shower cubicles are imported in, but much of the wooden furniture is hand-built by manufacturers, like Andrew Smith, who shows us how the folding bed is produced. There's a flat-pack style ingenuity behind the beds, as they fold within themselves, saving space and weight.

Space and weight reduction is of big importance, both for the comfort of those staying inside, as well as for the likes of fuel economy and handling. The kitchen counters are filled with Styrofoam for a lower weight, rather than built entirely out of hard plastic.

A similar philsophy applies to the interior. Where aluminium was previously used, fibreglass now dominates the exterior walls. 'Fibreglass is lighter and doesn't scratch or dent as easily,' Hensman explains. 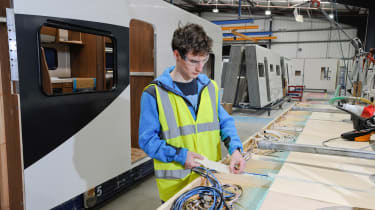 These exterior walls are built using a bonding process. A frame is filled with insulating foam or polystyrene, and layers of plywood and fibreglass are glued on top. These panels are then compacted in a high-pressure press under scorching temperatures to activate the adhesives. The walls are then left for at least two days.

Glue and fibreglass sound fragile, but motorhomes withstand years of abuse from the elements, and Auto-Trail goes as far as providing a 10-year warranty against water ingress, on top of the five-year standard warranty. 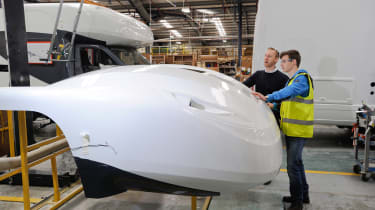 The next bit is where things get interesting. A vertical router connected to a computer run by Chris Smith, a machine operator at Auto-Trail, picks up the walls and starts to cut windows, doors and essential vents. It takes just 10 minutes for the machine to turn the wall into something resembling the side of a home.

'We build our motorhomes in a very unique way,' Hensman explains. 'Most other manufacturers attach the floor and then build the walls around it, but we build the cabin as a standalone unit - the floor gets attached to the chassis and the cabin gets put on top. This provides more structural strength, and reduces road noise.'

The wooden floors are built two weeks in advance, with finishing touches added by chassis shop operatives, like Darren Swinton who is currently working on installing some of the plumbing and gas pipes on the floor. 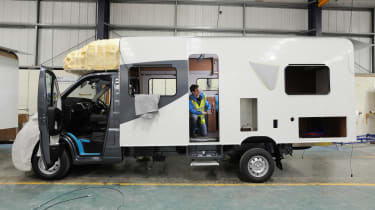 The job usually takes him a couple of hours, but today it's likely to be more time-consuming - this motorhome is being shipped to New Zealand, where legislation demands cut-off valves to be present around most of the pipes.

With the cabin in place, the only things left are the roof box and interior fittings. Buyers can pick from three types of roof boxes - some feature extra sleeping berths, while others just serve as additional storage.

Inside, accessories like fridges, microwaves, televisions and other house-like features are installed, quickly turning the vehicle from sawdust and looming wires into polished surfaces, working showers and a satellite TV hanging down from the ceiling. It's an unfamiliar sight to anyone who's ever spent time inside Fiat's original Ducato. 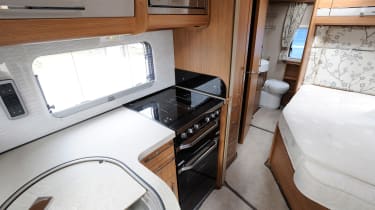 All that's left is a final inspection, where both Auto-Trail and Fiat engineers are on site to scrutinise every detail. It takes about a week to build a motorhome from scratch, and each week sees roughly 40 vehicles leaving the factory site, although this number is likely to increase in the future.

Auto-Trail is building another factory site next door to meet the growing demand. 'The new extension will give us the ability to increase production by 50 per cent,' says Hensman. 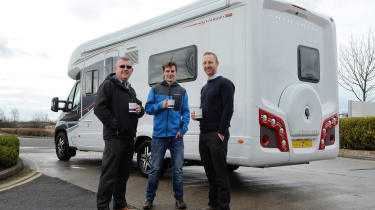 So, why the spike in demand? Hensman says it comes from more pensioners cashing in on their savings. The vehicles don't come cheap - prices start from £43,995.

After seeing the level of detail and workmanship that goes into building these vehicles, along with the utility and flexibility they offer for long holiday trips, we're starting to understand. Plus, you can brew up a lovely cup of tea without having to brave a service station.

Thinking of plunging your savings into a motorhome? Let us know what you think in the comments below...