BMW Motorrad and Lego join forces to make a 603-part flying bike kit, and end up creating a full-scale model 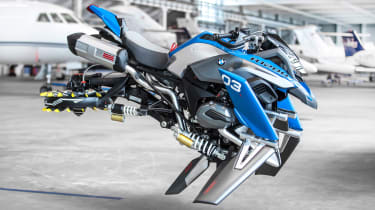 Based on the BMW R 1200 GS Adventure, BMW Motorrad had initially teamed up with Lego to create an alternative version of the latter’s 603-part plastic replica of the road-going bike.

• Will the flying car market ever take off?

Using the same pieces they were able to devise a hovering variant of the toy, and they loved the final product so much that they tasked a handful of BMW’s trainees in Munich to develop the real thing. 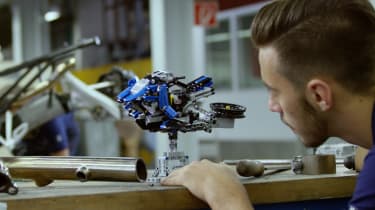 We say ‘the real thing’, but the Hover Ride Design Concept is for the time being at least a non-functioning entity, although the specially built propellers give a glimpse of how an actual hoverbike could work in the future.

“It was a great idea and a superb creative challenge to develop a fictitious model from the parts of the LEGO Technic BMW R 1200 GS Adventure set,” said Head of BMW Motorrad Vehicle Design, Alexander Buckan. “Our concept not only incorporates the BMW Motorrad design DNA with typical elements such as the boxer engine and the characteristic GS silhouette, it also draws on the LEGO Technic stylistic idiom.”

The Hover Ride Design Concept went on public display for the first time at Lego World in Copenhagen yesterday, and will soon move on to be showcased at various BMW bases. 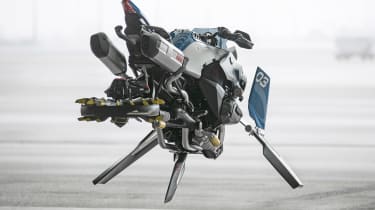 “It was incredibly inspiring to see colleagues from different disciplines working with our trainees,” said Markus Kollmannsperger, trainer for technical model-making. “Everyone involved in this project learned an awful lot.”

If this is the first step towards airborne personal transport, perhaps there is a future in which bikes will be just as popular as cars...

Do you like BMW's Hover Ride Design Concept? Let us know below...