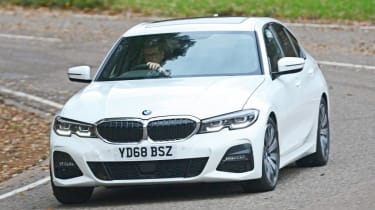 Company cars have long been used as a means for businesses to reward and retain staff as an extra perk on top of a standard salary. Unfortunately, the Government or, more precisely, HM Treasury, is aware of this kind of incentive and levies tax on company cars.

This company car tax is called Benefit-In-Kind (BIK) tax, as the cars are seen as an additional taxable benefit that falls outside of your standard salary with its income tax and National Insurance tax contributions. Whether you’re in a traditional company car scheme or gifted a company car allowance, it’s important to know how much tax you can expect to pay - especially if you’re the one choosing your company car.

BIK tax is one of many revenue streams used by Her Majesty's Revenue and Customs (HMRC) to keep Government coffers topped up, and as a result it's subject to annual changes. Invariably, this sees an increase in the amount of taxation levied on company cars as a whole.

Remember the old HMRC advert that claimed “tax doesn’t have to be taxing”? Whoever coined that slogan obviously had no idea what would happen to the company car Benefit-in-Kind (BiK) tax system in the 2020/21 financial year, which started on 6 April.

One of the results of these new tests is that a car will have higher on-paper CO2 (carbon dioxide) emissions if assessed under WLTP rather than NEDC regulations – even though it’s the same car so on-the-road emissions will be identical.

Because company car Benefit-in-Kind tax rates are based on how much carbon dioxide (CO2) a car emits, this would result in higher taxation for company car drivers with WLTP-assessed cars.

So the Treasury is changing its BiK rates to take account of the higher on-paper CO2 emissions derived from the new emissions tests; it’s an attempt to ensure drivers with company cars tested under the WLTP regime aren’t unfairly penalised. The way this is being done is by splitting company cars into two groups and using two new, separate sets of Benefit-in-Kind percentage values. The resultant system may be fairer than if the Treasury had left things unchanged, but it has created a structure that is somewhat complicated, to say the least.

Just to show how complicated this system is, a diesel car first registered from 6 April 2020 would have attracted a BiK rate of 33 per cent in the 2020/21 financial year because it is not RDE-compliant and attracts the four per cent diesel surcharge. The new rules, however, knock two per cent off its BiK in the 2020/21 financial year because it was assessed under WLTP criteria, although this cut disappears over the following two years.

It’s also worth noting that CO2 emissions for cars registered from 6 April 2020 are likely to be around 20 per cent higher than those of NEDC-assessed cars. Though this does vary from model to model.

For cars that were registered before 6 April 2020, NEDC-corellated figures are used for the 2020/21 financial year when calculating Benefit-in-Kind tax rates.

The tables for these cars are different from the ones the Treasury previously projected it would use for 2020/21, with rejigged CO2 bands, and different percentage rates in many areas.

For cars that are first registered after 6 April 2020, the new WLTP CO2 figures will be used to determine BiK rates.

However, to reflect the fact that WLTP CO2 rates are typically higher than NEDC rates for exactly the same model of car, the Treasury is knocking two percentage points of BiK off the rates used for older, NEDC-assessed cars.

However, it’s worth noting that this reduction will fall to one per cent in the 2021/22 financial year, and will disappear altogether in the following year. This means that, even if your car was tested under WLTP and therefore has higher on-paper CO2 emissions than an equivalent NEDC-tested car, there will be no reduction in its BiK rate from April 2022.

What about electric cars?

Pure electric cars will not be subject to any Benefit-in-Kind tax at all for 2020/21 – regardless of when the car was registered. In 2021/22 they will attract a BiK rate of only one per cent, and in 2022/23 just two per cent. This means company car drivers who choose an EV will save thousands compared with the driver of a comparable diesel.

What about the diesel surcharge?

Diesel cars not meeting the RDE2 element of WLTP tests will continue to be subject to a four per cent higher BiK rate than petrol cars. A number of makers – including Jaguar Land Rover, BMW, Mercedes and Vauxhall – produce RDE2-compliant cars, though, so it’s still possible to take advantage of the reduced tax rates that diesels incur thanks to having low CO2 emissions compared with their petrol equivalents.

So is now the time to choose a pure-electric or plug-in hybrid company car?

Yes, if you can. EVs have the most attractive BiK rates, but plug-in hybrids (PHEVs) also attract less tax. A ‘typical’ PHEV, for example, can do around 25 miles on battery power alone and will have 49g/km CO2 emissions; such a car would attract a BiK rate of just 12-14 per cent.

A typical petrol might emit 130g/km of CO2, attracting a BiK rating of 29-31 per cent, while a typical non-RDE2-compliant diesel might emit 105g/km, making its owner liable for a 28-30 per cent BiK rate.

What about road tax? Isn’t that increasing as well?

In much the same way as with company car tax, WLTP measurements are replacing NEDC CO2 readings for road tax (vehicle excise duty) from this year – although from 1 April rather than 6 April.

But while BiK rates apply every year for company car drivers, only the first year of road tax is linked to CO2 emissions, with a flat rate for following years. Because of this, and because of the fact first-year road tax costs are typically lumped into a new car’s on-the-road price, any increased charges related to WLTP being used for road tax rates will not hit buyers as sharply in the wallet.

Find out about the tax benefits of double cab pick-up trucks here...