The boxy Chrysler Grand Voyager is a practical alternative to mainstream MPVs, and it majors on long-distance comfort 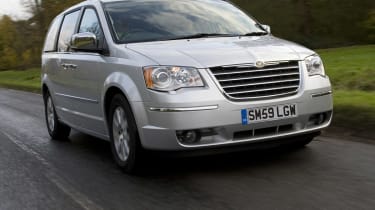 The Chrysler Grand Voyager has made big improvements over its predecessors, but the practical MPV still falls some way behind European alternatives like the Ford Galaxy and SEAT Alhambra. It's a capable motorway cruiser, but the Grand Voyager rolls and wallows on a twisty road, and the 2.8-litre diesel is unacceptably thirsty when compared to the likes of the Volkswagen Sharan. However, the superbly practical seating set-up and colossal load area make the otherwise underwhelming Chrysler an incredibly practical family car. One major sticking point is the Grand Voyager's price, as the basic model costs as much as the top-of-the range Galaxy.

The Chrysler Grand Voyager makes for a great long-distance cruiser. Motorway refinement is great, and the big diesel engine means performance isn't blunted when you're carrying six passengers. However, take the Chrysler to something a little twistier and the Grand Voyager’s bulk becomes all too apparent. Stacked against a Ford Galaxy, the big Chrysler rolls unacceptably in the corners and doesn’t come close in terms of driving dynamics.

Alongside European rivals like the Volkswagen Sharan and SEAT Alhambra, the Grand Voyager is at an automatic disadvantage due to its sheer bulk. The Chrysler is over 500kg heavier than the SEAT, and economy suffers as a result. Managing just 33.6mpg on the combined cycle, both the SEAT and VW are capable of closer to 50mpg. Emissions are equally awful, with the Chrysler churning out 222g/km of CO2. The Grand Voyager’s saving grace is its generous equipment, with even base-spec cars getting three-zone climate control and electric windows as standard.

If you like a car that looks like a van, then the Chrysler Grand Voyager should be top of your list. It has a typical, boxy, American design, making it an imposing thing to look at. The front-end is characteristically Chrysler, with flashes of chrome everywhere. Inside, the cabin is a big improvement on the model it replaces, but some of the plastics still feel cheap and the design is dull.

Usability is the Chrysler Grand Voyager’s trump card. The excellent Stow ‘n Go seating system impresses, with all five rear seats folding simply and quickly into the floor – revealing a gigantic 3,296-litres of boot space. Compare this to the SEAT Alhambra, and the Spanish MPV falls nearly 1,000 litres short of the colossal Chrysler. The second row of seats rotate through 180 degrees, which gives a usable office space – making this the MPV of choice for chauffeurs.

Chrysler doesn’t feature in our Driver Power Survey, but their reliability record does appear slightly patchy. The Grand Voyager is also a poor performer in the Euro NCAP crash tests – scoring a dismal two stars for occupant safety. The Ford Galaxy and SEAT Alhambra both manage a full five stars in the same tests. However, the Chrysler does get a host of airbags, and stability control is standard across the range.