Decent boot for a modern supermini, but few other tricks to make the Citroen C3 stand out from the rest of the class

Citroen’s ‘Advanced Comfort’ mantra is as much about coping with the clutter of everyday life as it is ride quality – so it’s a little disappointing that the C3 doesn’t offer many stand-out tricks on the practicality front.

That’s not to say the C3 isn’t capable; there’s room in the cabin for four adults (just about) and the 300-litre boot is bordering on the generous for the class. But the relatively old platform below the C3 means that Citroen hasn’t been able to incorporate any really neat tricks, such as a sliding rear seat that would allow you to prioritise either rear passenger legroom or boot space. 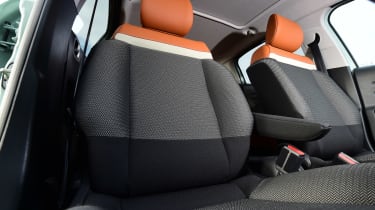 What do you get? Well, there’s a slightly random ‘storage slot’ below the touchscreen in the dashboard, and a bigger bin below it that could be handy for storing a phone when it’s hooked up to the USB socket nearby. The door bins are a good size, it must be said, and their linings are painted white to help brighten the mood – and make it easier to find bits of clutter you’ve dumped there. There are seatback pockets on Feel and Flair editions, but basic Touch spec does without them.

The rear seat has a 60:40 split on all editions, but the boot opening isn’t the largest, thanks to the C3’s funky tail-lights. There’s quite a lip to lift heavy items over, too - at least there are a couple of lashing eyes to help you tie them down once they’re in there.

The C3 has quite an elevated feel, although it’s still a supermini more than a baby SUV. This does give you quite a good view out, though, and the rear screen is deep enough to make reversing manoeuvres relatively straightforward.

The days when a supermini had to be no more than four metres in length have long gone, but the C3 sticks close to this brief (another result, probably, of its older chassis components). Its 3,996mm length and 1,829mm width are shorter and wider than the Vauxhall Corsa or the Hyundai i20.

The wheelbase is par for the course too, at 2,540mm - or slightly longer than the VW Polo’s.

It’s possible for four adults to be reasonably comfortable in the C3, although the individuals who end up in the rear seats aren’t going to be particularly happy if their companions up front are on the taller side. The biggest issue is knee and legroom, although the soft seatbacks create a bit of leeway. 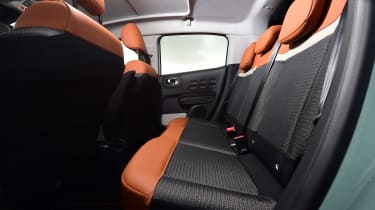 Up front, there’s no shortage of space for both occupants, and even if the optional panoramic roof is fitted (it’s available on Feel and Flair Plus only), six-footers are unlikely to complain much about headroom.

Getting in and out is straightforward too, thanks to doors that open to leave a pretty wide aperture, even for the rear seats. There’s a pair of Isofix points in the outermost rear seats, and the driver gets height adjustment on their seat on every edition of the C3.

In raw terms, the C3’s boot capacity is 300 litres, which is actually pretty decent when compared with the likes of the Ford Fiesta. It’s enough for a decent-sized suitcase, although you’ll need to pack cleverly if you’re going to squeeze in overnight bags in there beside it.

The shape is usefully square, but there’s a fairly big lip at the rear bumper that you’ll have to lift heavy items over before you can set them down into the load space. At least once they’re there, you can use the lashing eyes in the boot to help tie them down and stop them sliding around.

A split rear seat (60:40) is standard across the range; you operate it using buttons near the headrests, but there are no fancy additional controls in the wall of the boot, but then the C3 is so small it's easy enough to reach the shoulder buttons from the boot. With the seats folded right down the C3’s capacity grows to 900 litres. 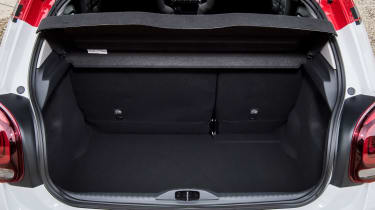 36
Go Back toInterior, design and technology
Continue ReadingReliability and Safety